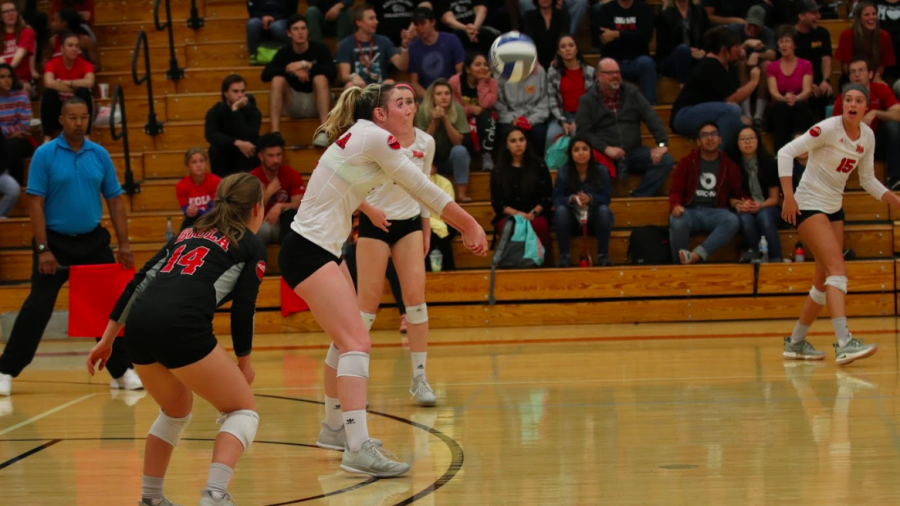 Junior outside hitter Sabrina Winslow digs a ball out during the Eagles' game against Azusa Pacific on Oct. 3, 2018. Photo by Michael Nerud / THE CHIMES [File]

Following their five-set comeback win at home against Azusa Pacific University on Wednesday, volleyball was back in action at Chase Gymnasium to take on PacWest foe Dominican University Friday. The Eagles fought hard for a another five-set victory over the Penguins in a gritty performance.

The Eagles dominated the first set, as they raced out to a 13-4 lead on a smash from sophomore outside hitter Savannah Hilde. Junior outside hitter Sabrina Winslow widened the gap to 20-12 on a kill, and they closed the set out 25-15 on a Penguins error.

Dominican proved much tougher in the second set, as they took an 11-8 early. Winslow tied the score at 20 on a kill, but the Penguins dug deep and pulled out the 25-23 win to even the match at one set apiece.

A more focused Biola team came out in the third set, as senior middle blocker Sierra Bauder put her team up 12-8 on a kill. The Eagles pushed the lead to 20-13 on a perfectly placed tip from senior setter Brinley Beresford. They closed the set out 25-12 on a kill from sophomore middle blocker Bekah Roth.

After the Penguins opened up a 13-6 lead in the fourth set, senior opposite hitter Karly Dantuma put down three kills to tighten the score to 13-10. However, a surge from Dominican put them ahead 20-13. Redshirt sophomore Christina DenBoer entered the game for the first time and gave the Eagles an immediate spark, picking up three quick kills, but Dominican battled to take the set 25-21.

“I think [DenBoer] was great, I love her energy. She did well, I love the excitement, she plays with a lot of passion and it was helpful. It was a lift for sure,” said head coach Aaron Seltzer.

After falling behind 5-2 early in the fifth, a DenBoer kill and ace followed by a smash from senior outside hitter Hannah Van Warmerdam put the Eagles on top 6-5. Dantuma put Biola ahead 8-7 at the side switch on a kill, and an absolute rocket from DenBoer forced a Penguins timeout with the Eagles ahead 13-10. Dantuma finished the match for Biola 15-12 on a kill from the backside.

“The fifth set, by that time I was pretty ticked off so that helps. I was just fired up,” Dantuma said.

“My block is setting a nice funnel for me to dig around, and my teammates are just talking well around me and helping me out,” said Hover.

Biola (13-5, 9-2 PacWest) heads to Hawaii for a three game road trip, starting with a matchup against Chaminade University on Tuesday at 10 p.m.