Cornerstone comeback: Volleyball storms back for five-set win over APU

Eagles rally from two sets down to take an instant classic from their archrivals. 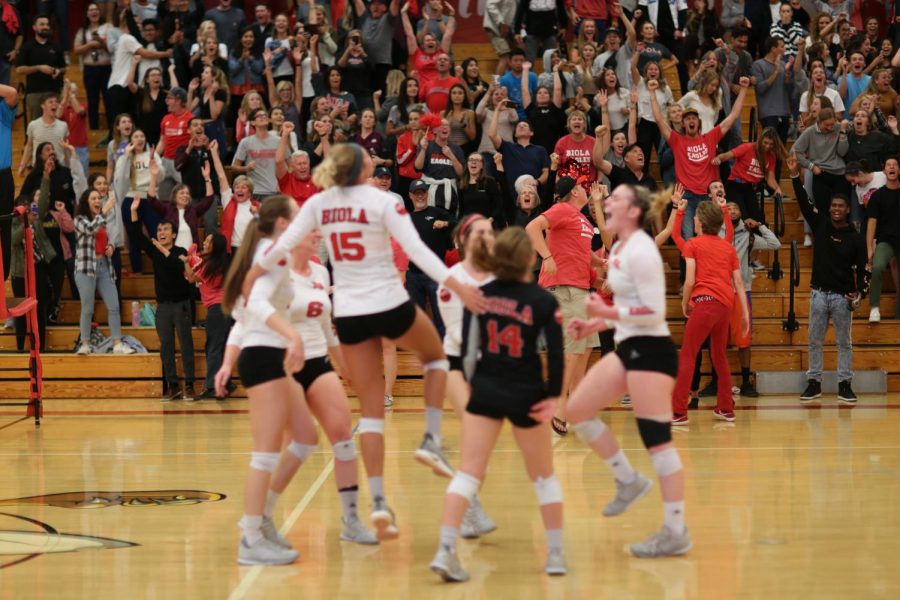 Photo by Abram Hammer / THE CHIMES

The sign above the scoreboard read “welcome to Biola,” and for the first two sets, Azusa Pacific University made themselves at home. But after squeaking out a win in set three, Biola volleyball turned the tables—and turned Wednesday’s Cornerstone Cup rivalry game into an instant classic.

The Eagles initially fell behind to the Cougars two sets to nothing, but came all the way back behind a raucous Chase Gymnasium crowd for a thrilling five-set victory to give APU their first conference loss.

“We’re definitely resilient, we love volleyball, we like to bring it to five games honestly. I think there was just a click in us and we realized we needed to pick it up and go,” said senior middle blocker Sierra Bauder.
STRONG FINISH
Biola asserted their dominance in the fifth set, although their 8-7 lead at the side switch did not appear to show that. However, the Eagles did not relinquish a point from that point on, as junior outside hitter Sabrina Winslow stepped back to serve and led her team on a seven-point run with two kills and a game clinching ace for the 15-7 win.

“I just tuned out the crowd and each time I went back [I was] like, ‘Ok, this is what I need to do, this is the form,’” Winslow said. “I couldn’t let all the excitement get to me. I just had to be focused.”

Bauder and redshirt sophomore outside hitter Christina DenBoer led the offense with 13 kills, while Winslow tallied 12 and four aces. Bauder dominated with an eye-popping 10 blocks, while sophomore setter Vanessa Garcia put up 27 assists. Sophomore libero Sami Hover had an incredible night from the back row as she recorded 27 digs.

“We’re excited and we’re gonna carry this momentum into the rest of conference [play],” Bauder said.
ROUGH START
The Eagles began with a sloppy first set as they allowed the Cougars to take a 14-9 lead on a setting error from senior setter Brinley Beresford. The Eagles closed the gap, bringing the score to 17-13 on a kill from sophomore middle blocker Bekah Roth, but the APU attack was too much and they closed out the set 25-18 on back-to-back unforced errors by the Eagles.

“I loved our energy, we were just high error, we hit zero in game one,” said head coach Aaron Seltzer. “Typically in these games it takes a while for teams to settle down.”

The second set was much closer, with the Eagles going on a six-point run late led by two kills from Bauder to take a 19-16 lead. However, the Cougars doubled down from there, rallying from a 23-22 deficit to take the set on back-to-back kills and an ace.

“After that second loss we came out here and Coach didn’t have a lot to say, but he said this is either where we roll over or we put up a fight,” said junior outside hitter Sabrina Winslow.
MOMENTUM SHIFT
Biola did the latter, working their way back from a 17-13 deficit late to tie it at 17 on a Winslow smash. A kill and ace from redshirt sophomore outside hitter Christina DenBoer put the Eagles ahead 23-20, and consecutive kills from Winslow gave Biola the set 25-21.

“We needed to calm down, we talked and said we’re a good team, and it was all about confidence, honestly, and knowing that we can beat them,” Winslow said.

With the crowd feeling the momentum shift, the Eagles rode the wave of energy to a 10-6 lead, helped by a kill from DenBoer. APU mistakes began to pile up, as five straight errors gave Biola a 15-7 lead. Beresford sparked the Eagles with a beautiful dump to the back corner, and DenBoer forced a fifth set on a kill that finished it 25-18.

The Eagles (12-5, 8-2 PacWest) will look to continue their winning ways at home on Friday against Dominican University at 7 p.m.