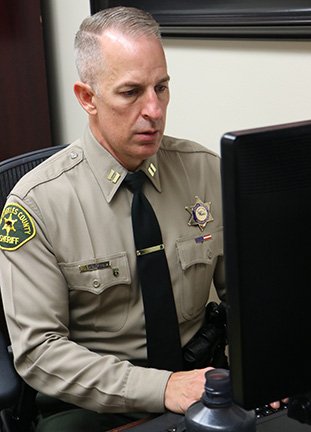 Capt. James Tatreau of the Norwalk patrol station helps coordinate deputies who respond to calls involving individuals who may have a mental illness. His department, like many others, has seen a significant increase in mental illness reports.

On the afternoon of Sept. 25, Los Angeles Sheriff’s Department officers received a report of a man in Norwalk armed with a knife and threatening suicide. After tense communication with the man, LASD personnel decided to de-escalate the situation by leaving.

The man is alive, and seems to now be in a better mental state, according to Capt. James Tatreau of the Norwalk patrol station. But situations involving mental illness, he says, have become more frequent over the past few years.

“Calls for 5150, or mentally ill patients, have just gone through the roof,” Tatreau said. “We’re not sure [why that is]. We have some ideas where that might be coming from, but it’s a big deal. And it means a lot to the department as a whole and us as a station to keep those handled the best we can.”

TAKING A LOOK AT THE NUMBERS

The Norwalk station, which also oversees La Mirada and parts of Whittier, has seen an 80 percent increase in 5150 holds over two years. These holds involve placing a mentally ill person in a psychiatric hospital for up to three days.

Norwalk is not the only location going through this increase. The South Patrol Division, which also includes the Cerritos and Lakewood stations, has experienced a 49 percent rise from 2015 to 2017, and the entire LASD has reported an average increase of 41.4 percent.

Some studies, including a 2006 report from the Bureau of Justice Statistics, have shown individuals with mental illness have a higher risk of being arrested. The Treatment Advocacy Center, a nonprofit that argues for better mental health care, also reported people with untreated serious mental illness are 16 times more likely than other civilians to be killed while being approached by law enforcement.

These 5150 calls, like any incident involving mental illness, also drain department resources, according to Tatreau. They often require deputies, all of whom have received training in mental health awareness, to leave their patrols and address a situation which can last several hours.

In an effort to provide support to officers, the LASD is expanding its number of Mental Evaluation Teams from 17 to about 38, and by next year to over 50, Tatreau says.

These MET units consist of a specially trained deputy and a mental health professional who can rush to a situation and help with de-escalation. In cases where a person is threatening to take their own life, deputies are trained to speak in gentle tones, turn off bright lights and allow the person some distance, according to Tatreau.

Other police departments have also encouraged de-escalation when interacting with those with mental illness. After a homeless man with schizophrenia was killed in a confrontation with Fullerton police officers in 2011, the department has trained personnel in mental health awareness, according to the Orange County Register. “There may be still be physical conflict, but the goal is to make sure that the outcome is that of a peaceful outcome, whether that’s… trying to get them arrested or somebody that’s barricaded or just being able to communicate effectively with somebody who may be suffering from mental illness,” said Sgt. Jon Radus of the Fullerton Police Department. “And I do believe that our efforts have been successful.”

BRINGING THE ISSUE TO BIOLA

Tatreau says the LASD also works closely with Biola’s Campus Safety in many situations, including those involving mental illness. He notes that college students face many stressors that can prove detrimental to their mental health, but hopes increased discussion of the issue will encourage people to reach out.

“I like that we’re talking about it more often, and it seems that there’s less of a stigma to it. We have a long way to go, but I think the more we talk about it and keep it open, the better,” Tatreau said.