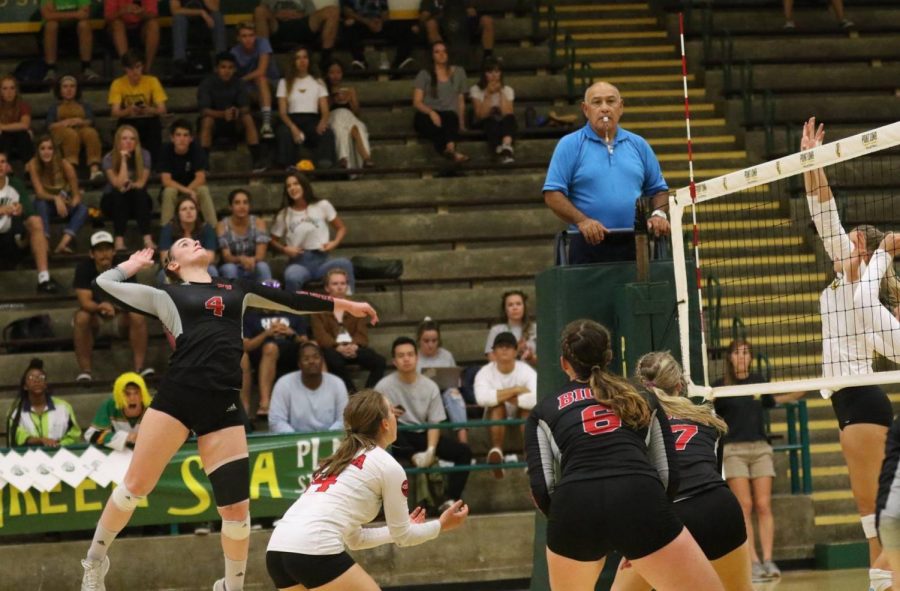 Junior outside hitter Sabrina Winslow readies for a kill while teammates look on during the Eagles' game at Point Loma on Sept. 11.

Volleyball faced their first road test of the year in PacWest play on Tuesday, taking on Point Loma Nazarene University in San Diego, Calif. The Eagles came out on the losing end of three tightly contested sets, losing the match in a sweep.

Both teams were ready for a battle, as last year’s matches were very tightly contested. Tonight proved no different, as each set was won by three points or less.

The Eagles took an 8-6 lead early in the first set on an ace from sophomore libero Sami Hover. Back-to-back kills from senior opposite hitter Karly Dantuma and a Sea Lions hitting error gave Biola the lead at 15-12, and they stretched that lead to 20-14 on a kill from junior outside hitter Sabrina Winslow.

However, PLNU went on a run to tie the set at 24, and the Sea Lions closed the set out with three kills in the final stretch to win the set 27-25.

The second set began with a bang, as Biola jumped out to a 4-0 lead on kills from Winslow and sophomore middle blocker Bekah Roth. Just as they did in the first set, PLNU battled back to take the next 10 points and a 10-4 set lead. It became an uphill battle for the Eagles, but they eventually tightened the score to 24-23 before a kill closed the set out 25-23 in favor of the Sea Lions.

Hoping to force a fourth set, Biola battled in the third. The set stood tied at 12 at the midway point of the set on another Dantuma kill, but the efficient PLNU attack pushed them to a 22-19 lead late. Roth closed the gap to a point with an ace, but two straight points gave the Sea Lions the sweep with a set score of 25-22.

Winslow and sophomore outside hitter Christina DenBoer led the offense with nine kills respectively, while senior setter Brinley Beresford dished out 19 assists. Hover held down the defense, tallying 15 digs on the night.

The Eagles (5-4, 1-1 in conference) continue PacWest play at the Academy of Art University on Friday at 7 p.m.