Krasinski makes his directorial debut on a film of unparalleled originality 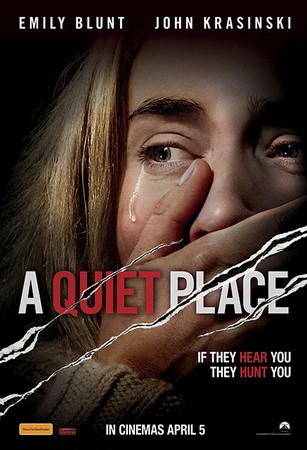 John Krasinski has made quite the name for himself as America’s beloved sweetheart on “The Office,” and has shown audiences his niched knack for action in films like “13 Hours.” Though his recent ventures have taken him to the action realm, most people know Krasinski as the dynamic and witty comedic relief of Jim Halpert. Audiences adore him for his phenomenal acting skills, but were anxious to see him sitting in the director’s chair for the first time on his passion project, “A Quiet Place.”

This film not only found itself with a much more serious tone, but also within the horror-esque thriller genre that we had not seen Krasinki dabble with before. Krasinski plays the protagonist Lee Abbott, the patriarch of the family that the film revolves around. In “A Quiet Place,” the Abbott family lives in a world that has now been reduced to silence—make a sound and they will hunt you. Who is they? Currently unknown, but the audience knows that sound alerts the creature to come forth and violently wreak havoc upon their bodies.

The premise of this film proves to be grade-A cinematic gold. Bringing about a plotline of pure originality seems almost impossible these days, as the medium of film has been around for almost a century now. Writers Bryan Woods and Scott Beck capitalized on the foundational idea of a world without noise, which brought about extreme suspense for scenes to come. Because there was nearly zero dialogue, the sounds that were made were far more vital and illuminating than any conversation could have ever been.

And since the dialogue was indeed so scarcely showcased, the facial and expressional acting had to be superb, and that it was. Emily Blunt, who happens to be Krasinski’s wife in real life, played his wife in the movie as well. Her acting was by far the most impressive as she has to undergo birth by herself in complete silence as she attempts to hide from the creature that currently crawls in her home. She contracted and moved her body and face in ways that amazingly displayed the extreme levels of pain she was feeling, causing audience members to flinch in discomfort.

The couple’s children, Regan and Marcus, played by Millicent Simmonds and Noah Jupe, foil their parents in beautiful ways. Regan, the eldest daughter, undergoes her early teen years by lashing out in misunderstood fits of rash anger. Noah serves as the basic human fear element of the film, with his vulnerability and youth shining through as he portrays the direness of their situation.

“A Quiet Place” truly had a lot of hype from both the commercials and the cast interviews. Because of its impressive actors and unparalleled storyline, it definitely deserves recognition, but upon leaving the theater something did not sit right. The film lacked in solid character arcs, as well as disappointed on the fear factor. Because they had marketed the film as a horror flick, audiences may find themselves annoyed by the few jumpscares, which were replaced by a more refined suspenseful feeling. Alongside that, the set-up of the film felt slow and prolonged, making the set-up of this world of theirs too on the nose.

Krasinski made excellent decisions in both his immaculate casting and cinematography, but may have left audiences with the feeling of a first time director. Criticisms aside, there appear many redeeming qualities within the film as well. He brings forth the theme that family should stick together and loyally protect each other no matter what. This brings a godly-centered familial view into the mix, and that can most ardently be appreciated.