Biola actors shine as they put forth a contemplative story about love and transformation. 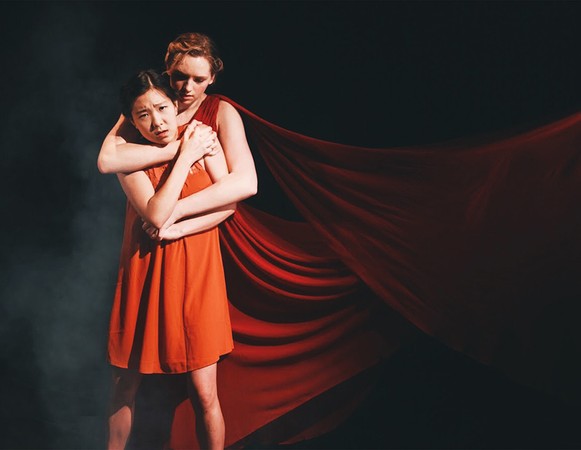 Excitement fills the air as the rehearsal for Theatre 21’s “Metamorphoses” have just finished. As the cast and crew filter their way out of the theatre, director Zachary Bortot calls a few actors and crew members behind for notes. A few moments pass when suddenly, wham! Theatre 21 echoes with a loud thud as Bortot slams his book on the ground following a beautifully emotional monologue from junior psychology major Donna Park.

“You better thank me at your Academy Award speech,” Bortot exclaimed.

Transformation stands as the resounding theme of Theatre 21’s spring play. Not only does this theme lie in the story, but also in the process of production. Park, who grew up very shy, transforms into a radiating vessel of emotion, as does every actor in the play. “Metamorphoses” proves an incredible showcase for Biola’s best actors as they handle complex themes directly, leaving the viewer contemplating life and love.

“Metamorphoses” tells 13 myths that dive deep into complicated and displeasing themes of love. The production seamlessly transitions through famous stories such as Cosmogony, Midas and Myrrha as they fearlessly tackle the varying degrees of love’s transformative power. All the myths are told through a massive pool center stage, which represents how the heart transforms.

The production presents many challenges. For the actors, they must embody multiple characters, all while dancing around a pool and telling stories about the complexities of love. For the last six weeks, every crew member spent time choreographing around a pool, understanding the perplexing themes and becoming a different person. In preparation for her role, junior theatre major Reagan Smalley began by fully understanding the script and its poetic devices to find her own way of expressing and interpreting it.

This play demands that each actor embody the character. It requires more than acting––becoming. Every single performance stands out as each actor beautifully conveys emotion that permeates deep within the audience’s heart. Each cast member brilliantly brings impressive gravitas as they blend it with timely comedy and intelligent storytelling. This play will captivate even the most callous of viewers.

“With the theme of transformation, it is immensely important that each actor transform into their character,” Bortot said. “We have to have actors that are very confident in themselves but capable of using themselves in different ways.”

The production handles difficult myths with ferocity and truth, unafraid to tackle displeasing stories because of the redeeming messages they hold. Every myth deals with love in a specific way. For some, they tell dangers of loving the wrong things––toxic love. Others tell the story of agape love and redeeming love. For Bortot, it remained important that this play held both messages because he wanted a story that challenges viewpoints rather than just confirming them.

“Theater should challenge us,” Bortot said. “I don’t want to just entertain audiences, I want them to wrestle with something and have conversations afterwards. This play also shows the dangers of love and how we can love the wrong things.”

The play certainly leaves the viewer contemplating what they ought to love. Junior accounting major Michael Ramirez believes that the play provides a great parallel to one’s life in sin and how one needs Christ’s redemption to free us through love. Per the nature of the play, there are some scenes that leave the viewer feeling uncomfortable but the cast handles such scenes with class as the scenes do provide an important allegory to one’s tendency to fall from Christ and live lives toward destruction.

Just as the heart needs to transform, every actor transforms into brilliant vessels of storytelling which captivate the audience through emotional candidness. “Metamorphoses” provides an honest look at what one loves and what one should love, prompting the viewer to have discussions within themselves. “Metamorphoses” inspires the audience toward growth, compelling them to morph beyond their present self. Certainly a challenging production, their hard work stands as brilliant.