DC faces its most important test yet

The Justice League saves the world as DC tries to save their franchise. 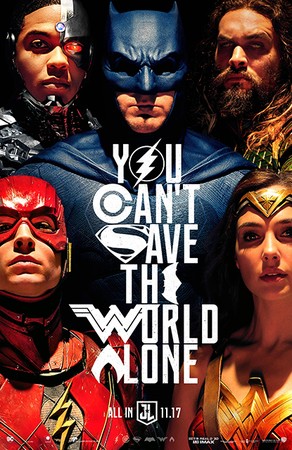 DC Entertainment officially launched its cinematic universe with “Man of Steel” in 2013. This began their arduous and often fruitless attempt to compete with the Marvel Cinematic Universe, which already had a five year head start. DC’s hamfisted attempt to rush the development of their film universe, something that Marvel took their sweet time to do, quickly became evident.

With box office disasters such as “Batman v. Superman: Dawn of Justice” and “Suicide Squad,” fans became dismayed at the inconsistent and unimpressive universe in which they found their heroes. However, the embers of their hope were rekindled with the unexpectedly popular “Wonder Woman,” which took the world by storm last summer. This left fans hopeful, if not skeptical, about “Justice League.” “Justice League” represents the culmination of DC’s work—the litmus test which would determine the success of their film universe thus far. With the odds stacked against, “Justice League” proved a thorough disappointment to fans and the box office alike.

The plot proves the most disappointing aspect of the film. “Justice League” features an uninspiring and tired plot that sees its heroes banding together to fight a bland and stodgy villain, Steppenwolf, who attempts to take over the world. Batman, played by the divisive Ben Affleck, goes around the world to recruit his superfriends in preparation for Steppenwolf’s invasion. Rather than properly explain the heroes’ motivations for joining the league, the film rushes the team together and sees their characterizations as a small hurdle to fly over on the way to the climactic battle scenes. The plot boasts of little to no twists and turns when it could have explored so many more interesting areas from the comic universe.

The cast does a decent job. Affleck shows a clear lack of dedication compared to his previous outing as the caped crusader, which remains unsurprising after he has all but checked out of the franchise. He portrayed a frustratingly inaccurate and incompetent Batman that left many fans disappointed after the potential he showed in “Batman v. Superman: Dawn of Justice.” Gal Gadot impresses once again and continues her popular depiction of the Amazonian goddess from “Wonder Woman.” Henry Cavill only appears towards the end of the film, but he proves one of the most enjoyable parts of the film as delivers the most accurate depiction of the famed Kryptonian to date.

The main subject of debate revolves around the rest of the league: Ezra Miller’s Flash, Jason Momoa’s Aquaman and Ray Fisher’s Cyborg. Though left with little to do, each of them impress with their debut and leave fans interested in their characters and eager to see more. Miller acts as the sometimes overbearing comedic relief throughout the film, Momoa plays the long haired bad boy who does not care to show emotions and Fisher plays the conflicted and hesitant member who struggles to understand himself as he reckons with the larger world around him. The interaction between all six cast members proves the best part of the film and makes it worth seeing.

For all its flaws, “Justice League” still represents a turning point in the DCEU. After the poor response to their dark and dour tone in “Batman v. Superman: Dawn of Justice,” DC began their course correction by making “Justice League” a light hearted and more colorful adventure. The film shows hopeful imagery with the heroes saving the world and smiling while they do it, rather than being clouded by the inner conflict seen in previous films. This is partly due to original director Zack Snyder’s departure from the project in May before “The Avengers” director Joss Whedon came on board to handle reshoots and post-production. Whedon brightened up the film and added lighter dialogue and elements.

Apart from its lackluster plot and forgettable villain, “Justice League” proves a fun romp, boosted by the entertaining interactions between the cast.