Greatest Christmas films—according to us

Do not fear, bask in the holiday cheer with The Chimes’ favorite Christmas flicks. 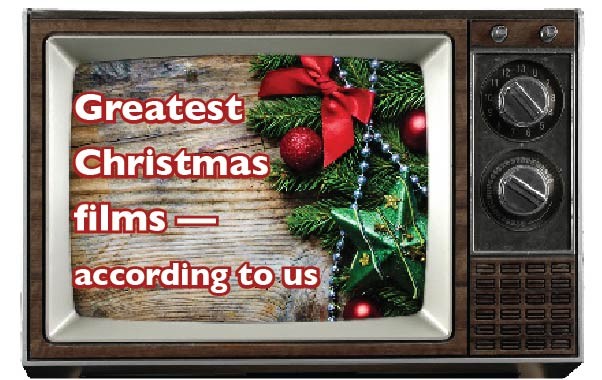 Caleb Aguilera’s Pick: “Home Alone” — What is better than watching two men be  mentally, emotionally and physically attacked by an eight year old child for 103 minutes? Watching it on Christmas! “Home Alone” ranks among the holiday’s best films with a heartwarming message about forgiveness and family. Kevin McCallister steals your heart with a warm smile and crafty wit.
Kyle Kohner’s Pick: “It’s a Wonderful Life”— This film stands as arguably one of the best films of all time, period. Of course director Frank Capra is at his best but the film’s draw is actor James Stewart, whose distinguished talent pierces through the film’s blizzary holiday setting with effortless charm. With all this to say, the magical feeling synonymous with Christmas time would not be possible without the humanity brought to center stage by this timeless classic.
Ashley Brimmage’s Pick: “National Lampoon’s Christmas Vacation”  — “Christmas Vacation” follows a young Chevy Chase as he attempts to tackle decorating for Christmas. You will feel less alone in the craziness of your family, as the “hap-hap-happiest Griswold Family Christmas” assures you sometimes, a couple glasses of egg-nog are necessary to get through the holidays. Prepare to have a remote in hand, as there are some scenes that my dad—to this day—fast-forwards to “preserve the holiday spirit.”
Jessica Goddard’s pick: “White Christmas”— Nothing says Christmas tradition like a movie that transports you to the golden age of Hollywood and treats you to the sound of original Christmas singers, like Bing Crosby and Rosemary Clooney. With famous performances from Vera Ellen and hilarious Danny Kaye, the film is vibrant, entertaining and complete with all the elements needed for that cozy holiday feeling: family, romance, surprise, giving and, of course, snow.
Jana Eller’s pick: “A Christmas Story”— In all its 80s flair, this classic follows the hilarious adventures of Ralphie as he tries to convince his parents and Santa to bring him a Red Ryder B.B. gun to defend his family against bandits. Spend some time this season embracing your inner child in a wild pursuit for the perfect Christmas gift against all odds. It will have you singing “Fa-ra-ra-ra” in no time.
Rebecca Mitchell’s pick: “Elf”— This movie is the epitome of Christmas joy as it shares the story of Buddy the Elf, a grown man, who travels to the United States to meet his father and ends up singing loud for all to hear. This holiday season take the time to laugh alongside the human version of Rudolph the Red-Nosed Reindeer, and fall in love with his childlike wonder.
Austin Green’s pick: “The Year Without A Santa Claus”— Its main characters include Mrs. Claus, two elves on “a secret mission,” a boy named Ignatius, a baby reindeer who gets put in a dog pound and two goofy clowns who control the weather. Oh, and a sick, cranky, bowler-hat-wearing Santa. The film also contains the best song in Christmas movie history: a two-part broadway ballad sung by demigod brothers Snow Miser and Heat Miser.
Christian Leonard’s pick: “The Nightmare Before Christmas” ― This film captivates audiences with music and visuals that are equal parts chilling and gleeful. It takes the viewer away from the traditional Christmas scene and shoves them into a world of terrors while somehow remaining full of energy and joy. Each line Danny Elfman sings vibrates with childlike wonder, casting a light of discovery upon the holiday that audiences have grown accustomed to.
Vic Silva’s pick: “The Holiday” — Bringing together an international cast is always a prime decision made by any director. If you find yourself looking for an endearingly witty romantic comedy that incorporates pangs of utter heartbreak, sporadic humor, sweet life lessons and, most importantly, memorable character dynamics, then you have come to the right film. Sit on down to enjoy a flick about your cliche Christmas, but a refreshing Christmas storyline nonetheless.