Torrey puts a twist on Shakespeare 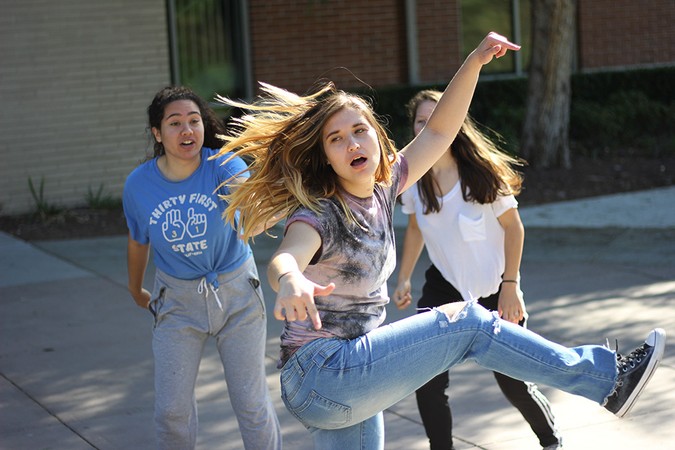 When it comes to the Torrey Honors Institute, time for breaks becomes exceedingly rare. This makes the amount of time and energy that the Torrey Theatre puts into the production of “The Complete Works of Shakespeare Revised and Abridged” extraordinary.

The production includes all of Shakespeare’s works, and combines an educational, yet comedic take on his stories. The actors receive the opportunity to carry out their roles with their interpretation of the work and their character.

Junior cinema and media arts major Paul Davis and junior design major Allie Orth directed the play. Orth found the show very helpful to the Biola community in that the portrayal of the Shakespearean works remains a rarity.

“This is something both Paul and I have felt a lack of in Torrey,” Orth said. “We read a lot of Shakespeare, but we don’t get to see it.”

Orth and Davis gained the rights to the script, which has been revised a few times since it’s original show in the 80s.

“We made the script fit into the Biola community and the Torrey community,” Orth said. “Some of the jokes were a little outdated so we wanted to make it more funny to our audience.”

THE PROCESS OF PERFECTION

Orth helped work with the actors and actresses, as well as the entire production team for over 200 hours in order to make this production happen. Many of the students involved put time outside of the scheduled rehearsal, and used their involvement to replace their Torrey paper that every student in the program must complete.

“It’s a crazy commitment for the directors and actors, especially with a cast so small. It’s been a lot of pressure on them to memorize their lines because they completely carry the show,” Orth said. “The requirement for this to count as a Torrey paper is 40 hours, but it’s going to be closer to two or three hundred hours.”

The cast consists of more than just Torrey students, though. Junior communications major Emily Castro has never been involved in Torrey.

“I heard about the play through some friends of mine,” Castro said. “This show seemed like a really exciting blending of two things I’m passionate about: comedy and Shakespeare.”

Castro agrees that the cast put many long hours of rehearsing into the production and they hope the show provides an educational as well as comedic experience to their audience.

“There are only three actors that are on stage per night, and in total we have six actors,” Castro said. “We have a rotating cast, so it’s ultimately a three-person show. We’re all holding the show up.”

Castro plays herself and takes on roles such as Hamlet, MacBeth and other iconic Shakespearean characters.

“In the script, we each have the names of the original writers, but use our own names in the show,” Castro said. “I play the character of Jess who is the Shakespearean scholar.”

The overall time commitment that each actor, director and production team member puts into making their vision of a comedic portrayal of Shakespearean works a reality proves very impressive. The acting and directing involves the dedication and commitment of every student, and they all worked as a team to make this production as professional as possible. The show premieres Nov. 16 to 19 in the Hope Amphitheater.