The Eagles look to complete the tough task of filling the gaps while still improving on the current team. 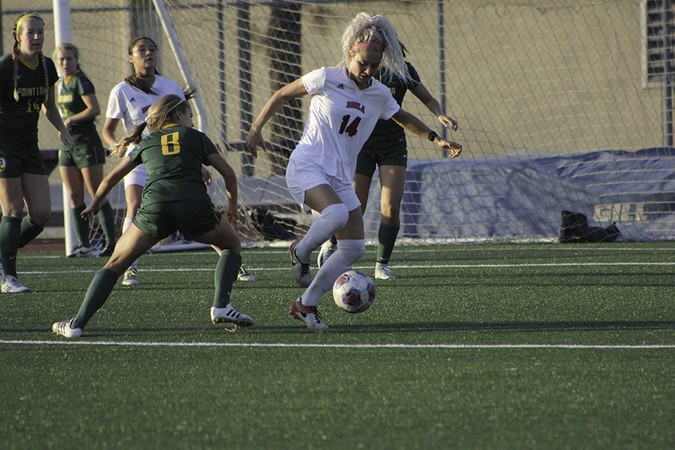 Women’s soccer finished the 2017 season at just about the best place they could have. They placed fourth in the tough PacWest Conference and dismantled their opponents throughout the National Christian College Athletic Association tournament, not allowing a goal during four games and cruising to victory in the final, 4-0 over top-seeded Indiana Wesleyan University. The team dominated opponents over the last two months of the season, finishing on an eight-game win streak in which they did not allow a single goal. The shift for the Eagles now goes towards doing it all again in fall 2018.

College sports give athletes limited years of availability, which opens the door for new players to fill roles of departing seniors. Head coach Erin Brunelle’s squad has eight seniors graduating, including five starters. The most notable departures are last year’s top goalscorer and assist leader, forward Samantha Verduzco, and defender Cat Newberry, who played almost every minute of the season for the Eagles.

“It’s a good group that’s leaving us,” Brunelle said. “They were a core group for us on and off the field. We’ve been working hard this spring… trying to get the returners to gel with one another and see who might be able to slide into those roles.”

Biola certainly has a lot of depth in its roster, especially at forward, but replacing Verduzco is a tall order. The Eagles’ attacks usually flowed through the senior, who grabbed team highs with seven goals, nine assists and 61 shots. Sophomore forwards Sarah Jeffries, Paula-Marie Labate, Annmarie Alvarez and Sarah Yang all return after getting significant playing time in 2017, and freshman Madi DeMetropolis was slowly integrated into the offensive rotation and will look to make her mark in the Eagles’ attack. Biola also recruited Sierra Rangel from Da Vinci Design High School in Hawthorne, Calif., who scored 63 goals and assisted 27 more in her four years there.

“We expect it to be competitive,” Brunelle said. “Whoever is rising to the top and ready to go, that’s who we’ll go with.”

FILLING IN THE MIDFIELD

Attack is not the only area with key players graduating, as two departing central midfielders in Janae MeGorden and Ashley Ramirez leave big gaps to fill. Sophomore midfielder Hali Oakes started all 19 matches she appeared in alongside MeGorden and Ramirez in a center midfield trio.

“We had a really good chemistry the three of us,” Oakes said. “I’m hoping I can take a lot of what they taught me, because they were great examples and role models, and apply that to their spots… and working with other people in the middle.”

One of the few players entering their final season is midfielder Emily Neighbors, who will look to lead the Eagles on and off the field in the central midfield position. Another midfielder who will look to step up is redshirt sophomore Maddie Zimmerman, who earned 10 appearances off of the bench in 2017. Biola also has two young midfielders available to challenge for key roles: freshman Brynne Anderson and recruit Katelyn Penner.

The Eagles’ defense anchored the team, stopping opposing attackers for the majority of the 2017 season. They allowed 13 goals in 22 games with 12 shutouts, as sophomore goalkeeper Christina Rodriguez led the PacWest in goals against an average of .588 goals per game. She returns along with All-American defenders junior captain Madyson Brown and sophomore Colie Martin who all started every game last season. Newberry and Bri Mikalson are noteworthy defensive departures, as they both started every game of the season, with Newberry playing the most minutes of any outfield player.

Brunelle is now faced with the challenge of building a new back four, but this is nothing new for the coach.

“Four years ago we had a strong back line, that were all seniors graduating together,” Brunelle said. “The same thing is reoccuring, so we’ll have to [look] back to see what we did and what worked well there. I think we will rely heavily on training camp and time together to build chemistry, but it will take some time.”

Regardless of how the team gels together, the Eagles have recruited a very talented roster. They have set their sights on the qualifying for postseason and the NCCAA tournament.

“[A goal would be] to qualify, to meet the standards in conference to qualify [for NCCAA],” Brunelle said. “I’m sure the team will set their sights on the championship, but we’ve got to qualify first.”