The junior’s clutch hitting and stellar performance helped the Eagles avoid a sweep at Cal Baptist. 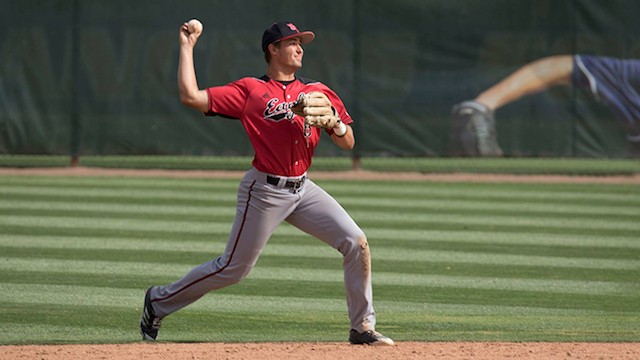 Even though the Eagles entered the weekend with a better record than their opponents, their four-game series against PacWest baseball powerhouse California Baptist University on April 5-7 posed a daunting task. Junior second baseman Joey Magro played a crucial part in Biola’s 9-7 win in the first game on April 5. After a slow start to the game, the Eagles strung together some hits to load the bases with two outs in the fifth inning, and Magro came through with a bases-clearing double. He would go on to score the final run of the inning to build Biola’s lead to 6-0. The Lancers came back to tie the game at seven, but junior outfielder Jerron Largusa broke the tie in the ninth inning before Magro came up to bat once again and hit a sacrifice fly to give his team a two-run cushion. He knocked an RBI single on the next day to give the Eagles an early 3-2 lead, and sprang into action once again later in the game as Biola tried to rally. With the Eagles down 9-5, Magro reached on an error and scored another run in the rally effort. Unfortunately for the Eagles, the Lancers would score 14 runs in the final two innings, blowing out their opponents 23-6. Magro went four for eight and batted in seven runs in the two games. His clutch hitting helped his team against a tough opponent and earns him Chimes Athlete of the Week.