Softball struggles for a win

Eagles suffer a fourth straight loss in a tough shutout. 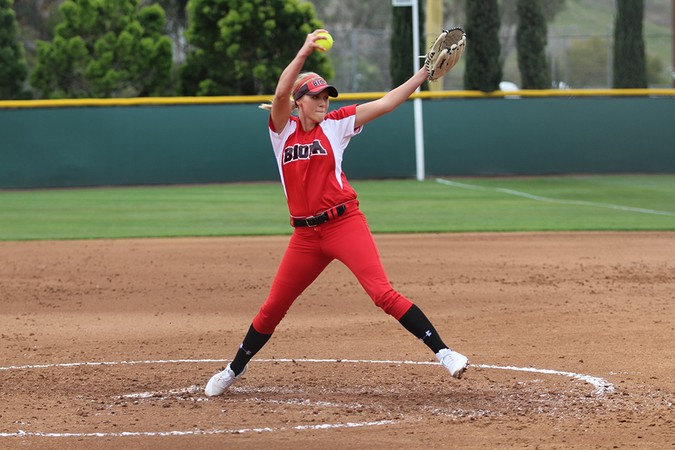 Softball fell shy of their 30th win after two more losses in their doubleheader against the Concordia University Irvine Eagles on April 4. The first game ended with the Eagles falling short 3-0 as well as a defeat in the eighth inning of the second game, losing 3-2.

In the first of two games, Biola enjoyed a strong performance by senior pitcher Terri Van Dagens, who held CUI to six hits but gave up three runs over her six innings. On the offensive side, CUI limited Biola to one base runner in the entire game. Biola came close to scoring in the fourth inning but it proved not enough for them to grab a run.

The second game took a different turn for the Eagles. A major challenge for Biola proved the tough competition against CUI’s ace pitcher who went 16-0 in the PacWest in the 2017 season. The game began with CUI dominating the first inning by scoring the first two runs. The Eagles fought to catch up to CUI by finally scoring in the third inning. Junior third baseman Missy Poti scored the first run for the Eagles to lessen the deficit.

Biola then managed to tie the game in the fifth inning by a contribution of two hitters. Junior shortstop Andi Hormel got the first hit in the inning and eventually scored the second run for the Eagles after a sacrifice fly from sophomore outfielder Jay Perez. For the sixth, seventh and eighth innings, the Eagles came close to breaking the tie but could not score again, leaving seven stranded players on the bases.

LOOK FOR A WIN

The losses moved the Eagles to 12-10 in the PacWest conference and 29-13 overall. The Eagles will take on the Notre Dame de Namur University Argonauts on April 14 at 12 p.m. and 2 p.m.