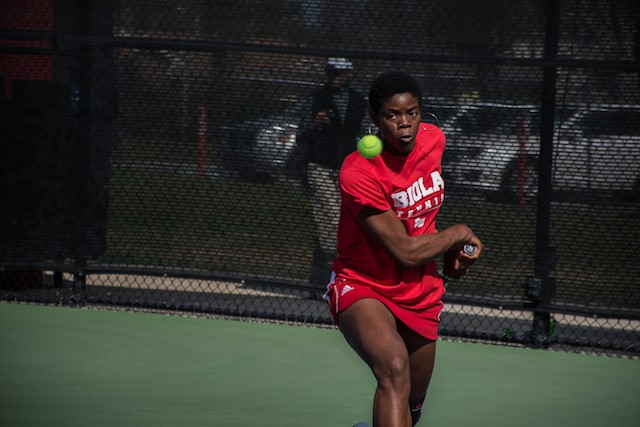 Men’s and women’s tennis both came close in their matches but lost against the Colorado Mesa University Mavericks with final scores of 5-4 and 6-3, respectively, on Mar. 17.

In the individual matches, Lau grabbed his fifth of the season win by set scores of 6-1 and 7-5. Lee also won his sets 6-0 and 6-2. Two Eagles forced ties on the Mavericks in the singles matches. James lost his first set 4-6 and won the second 6-3 before sealing his win by blowing out his Mavericks opponent 6-1.

“I haven’t had as many wins as I would’ve liked this year so it was good to get that win. It got everyone else fired up a little more,” James said. “I thought for sure we would’ve had that, it’s just tough to see it go.”

After this match ended, the Eagles and the Mavericks each fought to break the overall game tie of 4-4 to win, as Blair faced off against his CMU opponent. Blair lost the first set by 6-7 but came back to win the second 6-1. However, he fell just short in the third set, losing by a score of 7-5.

The duo of sophomore Lauren Lee and freshman Esther Lee won their third doubles match of the year by a score of 8-6. The teams featuring freshmen Madison Swaney and Sarah Morgan and sophomores Allison Torres and Tinisee Kandakai each lost their doubles matches by scores of 8-6.

In the individual matches, two Eagles fought to break their ties. Esther Lee won her first set by a score of 6-4 and lost the second 4-6. In the final tiebreak set, Esther Lee won with a 6-0 blowout. Kandakai also fought for a tie after a 3-6 loss and grabbing a 6-3 win, but then fell short in the third set by a score of 4-6. Lauren Lee won by close set scores of 6-3 and 6-2.

“This is the first time [Blair’s] been put in that situation where its like you win for the whole team or lose. Those are matches that…go either way,” said head coach David Goodman. “This last week we’ve been really focusing on just trying to have that positive energy throughout the match, that’s something I think we did today.”

The loss moved the men to 2-8 overall and the women to 1-11. The men’s next game will be home against the Sonoma State University Wolves on Mar. 19 at 2 p.m.