Lisa Tixier went out with a bang as the Eagles enjoyed a solid showing across the board. 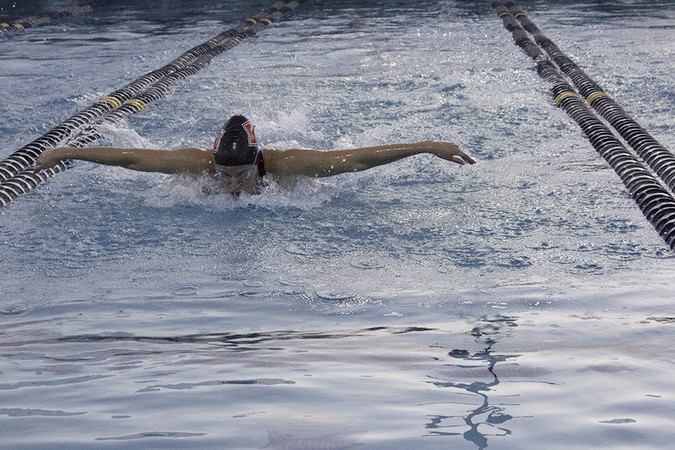 Swim entered the Pacific Collegiate Swim and Dive Conferencechampionships rested and confident, looking to end the team’s first NCAA Division II season on a high note. The Eagles left with 10 new school records and several fantastic farewell performances from their seniors, especially Lisa Tixier, who may have sealed her case for best swimmer in Biola history. The women’s swim team finished eighth out of 13 schools at the meet, while the men finished fifth of six.

The women’s relay teams kicked things off by setting new Biola records in the 200-yard medley and 800-yard freestyle relays on Feb. 14. The Eagles finished fifth in each race. A squad of sophomore Rachel Stinchcomb, sophomore Emily Silzel, Tixier and junior Rebecca Brandt earned a 1:45.56 time in the 200-medley, edging out archrival Azusa Pacific University. In the freestyle, Tixier, Silzel, Stinchomb and sophomore Bethany Harper swam to a 7:36.04 finish. The latter race also contained the third shattered record of the day. In her part of the 800-free relay, Tixier became the first Biola women’s swimmer to ever finish a 200-yard freestyle under one minute and 50 seconds when she recorded a time of 1:49.86.

Tixier, however, was just getting started. On Feb. 15, she finished the 50-yard freestyle in just 22.98 seconds to win the event and beat her own Eagles record. Minutes after her victory, she shared about what was running through her head before her historic achievement.

EAGLES MAINTAIN PACE IN BACK HALF

Tixier won her second event of the weekend in the women’s 100-yard butterfly with a 53.97 time on Feb. 16, edging out swimmers from California State University East Bay and Fresno Pacific University. Although sophomore Raymond Kam could only muster a 10th-place finish in the men’s 100-fly, his 50.86 finals time proved enough to beat the previous Biola record by half a second.

“I was kind of nervous, but I was ready,” Kam said. “I’ve been looking forward [to] that race all day.”

Towards the end of day three, the quartet of Stinchcomb, Silzel, Tixier and Brandt took yet another record with a 3:49.45 finals time to finish just outside the top three in the 400-yard medley relay. The Eagles took third in the men’s side of the relay with a 3:30.20 time.

The Eagles continued to rewrite their school’s record books in the fourth and final day, with three more new program bests. Tixier also added a third individual win in the women’s 100-yard freestyle and her 50.03 time broke her old Biola record by four-tenths of a second. The new mark only stood for a matter of minutes, however, as Tixier swam her leg of the 400-yard freestyle relay in just 49.63 seconds to end her collegiate swim career in fitting fashion. It became all Silzel, Harper and Stinchcomb needed to set yet another school-best relay mark. However, APU’s women’s swim team took fourth in the team leaderboard to score 10 more Cornerstone Cup points.

Kam also added the tenth and final new record with a fifth-place, 2:08.14 finish in the men’s 200-yard breaststroke.

Tixier won co-female swimmer of the meet and will graduate with at least partial ownership of 10 Biola swim records. She leaves the program in great shape, with a dynamic young head coach in Kauth and a young roster that ends the 2017-18 season with a meet that will not be forgotten any time soon.