The men’s and women’s basketball games against Azusa brought energy, thrill and DBC to Chase Gymnasium. 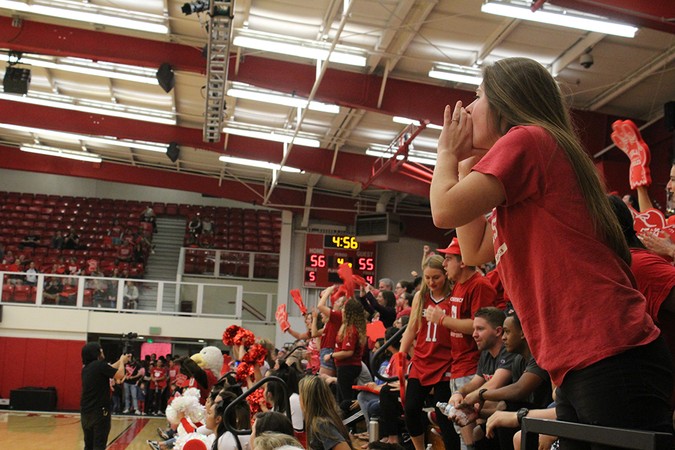 For the first time since 2012, Azusa Pacific University’s men’s and women’s basketball teams visited Biola’s campus for conference games on Feb. 3, the most anticipated day in the athletics calendar. While promises of free food, souvenirs and a carnival-like atmosphere helped draw students and alumni to Chase Gymnasium, the games themselves rewarded the large crowd with two classic battles between Biola and APU, re-igniting the storied rivalry back to its full force.

Several alumni made their first trip back to campus in years for the games. Some, like alum William Demberecky, enjoyed the family-friendly atmosphere he could bring his children to. Others enjoyed the chance to contribute to a heightened sense of school spirit.

“I think it definitely… draws everybody together—more people coming out to support the team,” said alum and accounts payable clerk Thom Davis. “If they were just another team, nobody would really care, but with a rivalry, everybody wants to come and see.”

The recent absence of meaningful games between the two schools meant that most of Biola’s undergraduate population was getting their first taste of the rivalry, and many of them enjoyed the chance to unite as one student body and cheer on the Eagles.

“It’s great to see Biola’s community come together like this. I think it just brings us together for sporting events a lot more than usual,” said sophomore intercultural studies major Colton White. “It’s just giving us all something to kind of unify behind.”

The crowd had plenty of energy through surprising and heartbreaking moments during both the women’s and men’s games. Several attendees already had a sense of the rivalry’s history and were excited to add to it.

“Everyone knows APU,” said sophomore psychology major Jonathan Shaw. “I think a lot of people when picking their college choose between these two schools, so to see your school beat the other one’s a big deal and it’s…a lot more neat to win against APU than it would be against Holy Names.”

The gym was packed by the beginning of the men’s game, with fans standing for most of it due to the full bleachers. The home crowd sparred with a vocal APU contingent as baskets on both ends received loud roars.

“The place was electric, everybody had a lot of respect, and they wouldn’t calm down,” said Biola president Barry Corey.  “They believed in [the] team the whole way through.”

The energy did not just stay in the stands, as it would spill onto the court too. Players were animated early and often throughout the game and could feel the energy of the crowd.

“[The atmosphere] was great,” said head men’s basketball coach Dave Holmquist. “I had forgotten how fun it was, the Azusa-Biola rivalry. So it’s great to experience that again.”

Others who experienced the rivalry in the past were also reminded of how amazing a great game in front of two passionate fanbases can be.

“It reminds me of playing, the excitement, the enthusiasm,” said former men’s basketball player and current Talbot Christian apologetics professor Sean McDowell.  “This is what I love about being at Biola and small college basketball, there’s no better rivalries than this.”