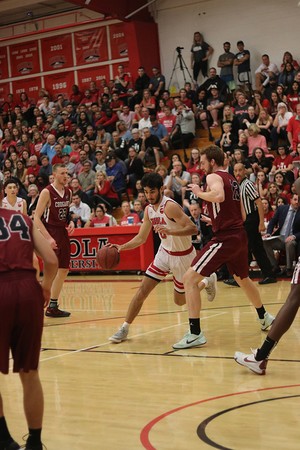 In one of the biggest crowds at Chase Gymnasium anyone could remember, on a night nobody there will soon forget, Biola University hosted its first Cornerstone Cup men’s basketball game on Feb. 3 against archrival Azusa Pacific University. The gym filled with students, faculty and alumni from both schools as intensity built following the women’s game from earlier in the evening. After letting the Cougars take the lead late in the second half, the Eagles tied the game and forced a turnover, which set up senior guard Blake Shannon Jr. to drain a three-pointer with 4.5 seconds left to give the Eagles the 73-70 upset win.

Both teams started off with great offense, which became a theme of the game. The first half saw the Eagles make 50 percent of their three, and out-rebound the Cougars 20-16. Junior forward Alex Talma set the tone early for the hosts, scoring seven of the Eagles’ first 17 points.

“I just wanted to go in, be aggressive, take it to them.” Talma said.

Redshirt freshman forward Isaiah Jones dominated the boards early, grabbing three rebounds in the first three minutes. The Eagles closed out the half on a 14-5 run, capped off by a buzzer-beating layup from junior guard Christian Carroll.

Biola  built their lead at the beginning of the second half, pulling ahead by as much as 12 with 11:33 remaining. Carroll and Shannon Jr. started to heat up near the end of the first half and lit up the APU defense after halftime, scoring 20 of Biola’s 37 points including six three-pointers.

The Cougars refused to give in and slowly began to reel in the Eagles. APU went a 12-2 run that pulled them to within one point with 5:23 to go. A Shannon Jr. triple pulled the Eagles back ahead by four to give his team some breathing room, but the visitors had already seized the momentum.

With 3:40 left, the Eagles clung to a 69-65 lead, but remained scoreless for a large stretch as the Cougars took the opportunity to go up by a score of 70-69, their first lead since the clock read 6:42 in the first half. Junior guard Trevor Treinen made one of two free throws to tie the game with 1:01 left. As a raucous crowd rose to their feet chanting for defense, Talma answered their pleas with a clean steal of the ball with 36 seconds left. After a timeout, Shannon Jr. received the inbound and dribbled the clock down. Talma set a screen and Shannon Jr. pulled up near the top of the key to sink a three-pointer with 4.5 seconds left. Treinen intercepted the ensuing rebound and held his free hand triumphantly in the air as time ran out and the Eagles started celebrating the massive upset.

“We wanted to keep [the ball] with our veteran guys,” Shannon Jr. said. “I got a big on me and I made a good move and luckily the ball went in the hoop, and it’s gone from there.”

Shannon Jr. led the Eagles with 21 points on 7-12 three point shooting. Talma notched a double-double with 19 points and 10 rebounds, as well as four assists and the key steal. Carroll scored all 13 of the Eagles bench points and went 3-6 from behind the arc. Treinen added eight points and seven rebounds, while Jones grabbed eight rebounds and notched six points.

“These guys will always remember [this game],” said head coach Dave Holmquist. “It’s been a tough year for us, but they’ve continued to work hard and stay together and so to have this reward tonight feels very good.”

With their first ever home conference victory since joining the PacWest, he Eagles add five points to their Cornerstone Cup campaign and improve to 9-13 on the season (3-11 in conference). They look to ride the high into their matchup against Holy Names University on Feb. 5 at 7:30 pm in Chase Gymnasium.