Several new faces join the Eagles as they get ready for Division II. 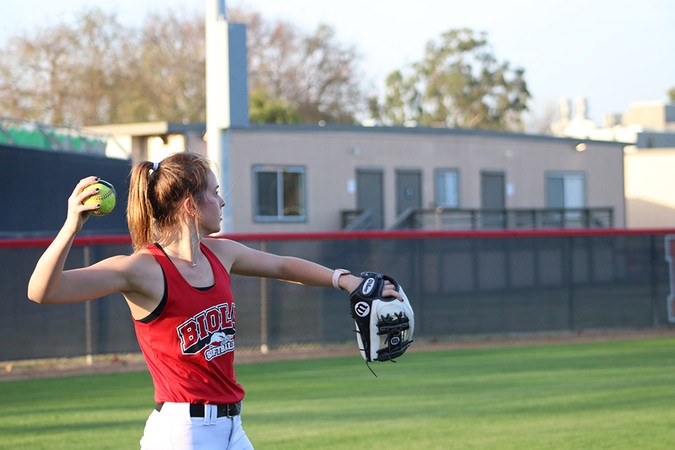 Lori Coleman has already overseen one rebuilding process for Biola softball. In 2014 and 2015, the Eagles’ head softball coach led her team to second-place finishes in the Golden State Athletic Conference and bids in the National Association of Intercollegiate Athletics championship tournament. This came after her first few seasons at Biola were, as her official bio on the Biola Athletics website even admits, “a struggle as she and the coaching staff worked to revamp the team’s roster.”

In two years since that successful stretch, however, the Eagles have sunk back into mediocrity, recording their worst GSAC finishes under Coleman. With Biola now in NCAA Division II and the PacWest conference, Coleman has brought in a new generation of softball players that she believes will make an immediate and needed impact on the Eagles—especially with their bats.

“We definitely want to be a stronger offensive team,” Coleman said. “I recruited some more power… In the past, we’ve had some strong hitters, but [now] we have, one through nine, a pretty strong lineup as a whole. I’ve had superstars, but as a whole team in general, this is probably the strongest offensive team that I’ve had in my nine years here.”

On the pitching side, Coleman and her staff have emphasized pitch command and the ability to throw strikes a year after the Eagles allowed a whopping 233 walks to only 138 strikeouts.

“We did a lot of walking the last year or two, and that has to stop,” Coleman said. “We made a big effort this year to really have a better command and control of our pitch locations.”

The 2018 Eagles are young, with a roster that features 10 underclassmen compared to only two seniors. Coleman, per her usual approach to youth, plans to give the more inexperienced Eagles plenty of playing time so they can acclimate to the college level before PacWest play starts.

“We’re all at a collegiate level, we all have standards we need to meet as collegiate athletes,” Velasco said. “Especially here at Biola, being surrounded by [that] environment, girls who want to grow in Christ with you and girls who have the same goal as you too.”

ONE ERA BEGINS, ANOTHER ENDS

The older Eagles do their part to enforce those standards for the next generation. Coleman has tasked several upperclassmen with leadership among position groups, such as junior center fielder Areana Ramos in the outfield and junior shortstop Andi Hormel in the infield. Even among Coleman’s young, talented lineup, senior first baseman Selina Sherlin will set the tone at the plate.

“They’re holding us accountable,” Velasco said. “We’re doing what we’re supposed to be doing. Keeping tradition too, that we don’t necessarily forget where we’re coming from, but also building off of what we have to make ourselves better.”

The team knows the importance of starting this new era on the right foot. Every player or coach the Chimes spoke to for this story emphasized their goal of making a splash in their new conference, with a spot in the National Christian College Athletic Association tournament at stake. That said, veterans like Sherlin know to value these experiences regardless of the outcome.

“I just really want to cherish these last moments with the girls,” Sherlin said. “We’ve been together for so long, and I only have a few months left. So just ending my career on a good note.”