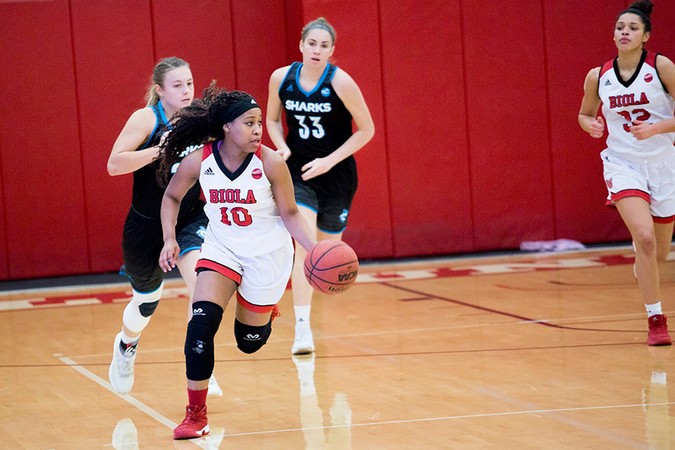 The Eagles faced off against Hawaii Pacific University in a rematch at home on Jan. 20. Eagles and HPU each gained the lead three times during the game, forcing 23 combined turnovers. The game ended with a loss for the Eagles by a final score of 69-61.

The game got off to a quick start, from tip-off onward. The Eagles started their lead in the first two minutes of the game by making shots and having a strong defense on the other end of the floor. The first quarter ended with the Eagles holding onto a three-point lead with a score of 21-18. Biola continued to outmatch HPU throughout the second quarter of the game. Junior forward Sara Dougan made a three point shot and put the score at 37-32 just before halftime, giving the Eagles a five-point lead.

HPU started closing the gap in the third quarter, leaving the Eagles with only a 52-51 lead at the end of the period. Biola struggled even more in the fourth quarter, only scoring nine points. The Eagles turned the ball over several times late and did not score following senior guard DeMoria White’s basket with 3:37 left. HPU pulled away late to snap the Eagles’ winning streak.

“It started off well. We had the lead, then [HPU] switched the zone and it threw our rhythm off,” White said. “Our defensive intensity and our focus was good. It’s an amazing growth from the first time.”

Head coach Alan Nakamura saw the game as a preparation for future contests and remains excited to see what will happen this coming month for the Eagles.

“WORKING ON BEING CONSISTENT”

“As we entered later in the second half, Hawaii Pacific caught a few key turnovers and took advantage of them, and we had a hard time coming back from that,” Nakamura said. “For most of the season we’ve been excellent at closing out games, but tonight we lost our poise a little bit and ended up giving Hawaii Pacific too many opportunities. We’ll keep working on being consistent for 40 minutes or more.”

The loss moved the Eagles to 4-6 in the PacWest conference and 7-9 overall. Their next game will be against Holy Names University in Oakland, Calif. on Jan. 25 at 5:30 p.m.