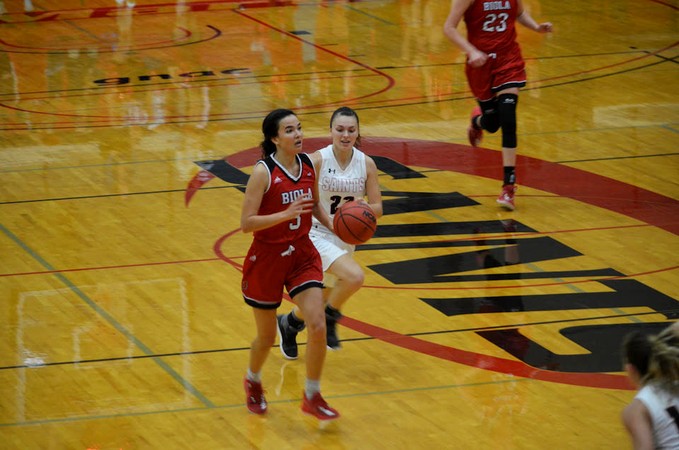 Women’s basketball played two road games during Thanksgiving week, facing off against Saint Martin’s University in Lacey, Wash. on Nov. 21 and Seattle Pacific University on Nov. 22. Both games resulted in losses for the Eagles, leaving them still hungry for their first road win.

Throughout the first three quarters, the Eagles struggled to score baskets and keep SMU from scoring. After a third quarter in which Biola missed four three point shots and scored only 10 points, the score stood at 52-38 with the Eagles trailing. The Eagles fouled eight times in the quarter, allowing Saint Martin’s plenty of opportunities to build their lead at the free throw line.

However, in the fourth quarter, the Eagles played at a much faster pace to mount a massive rally. They more than doubled their third quarter output with 21 points, narrowing the deficit to 58-56 with 2:46 left in the final period. However, Biola’s effort fell short in the end as Saint Martin’s went on to close the game with a 69-59 final score. Senior guard Demoria White led the way with 15 points and sophomore guard Tatum Brimley retrieved a team high of 10 rebounds for the Eagles.

The following game in Seattle, the Eagles played a very similar contest to the night before. After another dismal first half, the Eagles played harder in the second half and were rewarded with better offense. Biola scored 13 points and retrieved nine rebounds in the third quarter, but still found themselves trailing 56-37 heading into the fourth. The Eagles continued to push and refused to give up in the final period, but it proved far too late to put a dent in SPU’s lead.

The losses moved the Eagles to 1-3 overall. Biola will play its first PacWestgame against Hawaii Pacific University in Honolulu, Hawaii on Nov. 30 at 6:30 p.m.