Women's soccer guarantees their spot in the NCCAA Championships with 3-0 win. 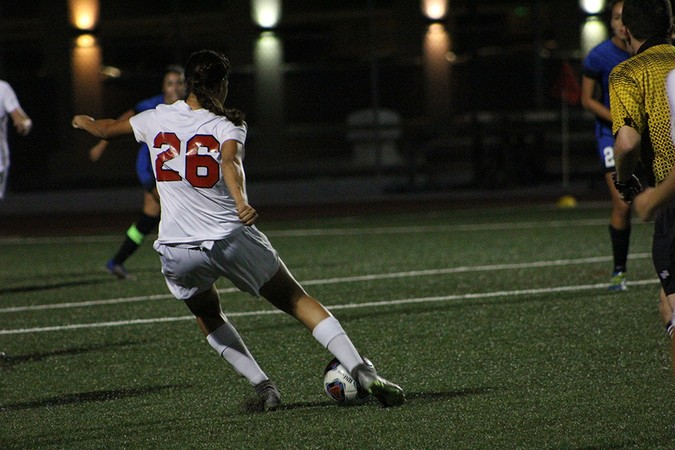 After a dramatic last day of the regular season saw Biola women’s soccer finish fourth and qualify for playoffs, the Eagles hosted their first postseason match against the Ottawa University Spirit. The hosts pelted Ottawa’s goal in the first 30 minutes before finally breaking through in the 34th minute when sophomore midfielder Hali Oakes scored off of a loose ball. Senior midfielder Janae MeGorden and senior defender Cat Newberry added goals to finish the match at 3-0, moving the Eagles on to the National Christian Collegiate Athletics Association National Championships.

EAGLES ATTACK FROM THE START

“It was a great team win,” head coach Erin Brunelle said. “They were tough to break down, but I think continuing to put pressure on them wore them down.”

The Eagles started the match off with a bad omen for the Spirit as sophomore forward Annmarie Alvarez dribbled past defenders and got a clean look four minutes in, but shot wide of the post. For the next 30 minutes, Biola continued to shoot at Ottawa’s goal, with 14 shots taken in the first 33 minutes. Oakes finally broke the deadlock in the 34th minute as the ball fell to her feet at the top of the 18-yard box and she blasted Biola into the lead.

Biola’s persistent attack showed as they continued to press for a second goal. That score came not long after the first, when senior forward Alexis Lee dribbled past her defender and sent in a cross pass to MeGorden, who shot it over the Spirit goalkeeper to give the Eagles a 2-0 lead. The hosts finished the first half with 20 shots (6 on goal) while holding the Spirit to zero shots.

The second half continued the trend of dominance for the Eagles even though Brunelle again deployed some players who usually do not get minutes. Newberry put the match out of reach in the 68th minute when she launched a free kick over the top of the Spirit backup goalkeeper to make the score 3-0. The Eagles maintained the lead to win the match comfortably. The hosts outshot the Spirit 35-3 (13-0 on goal) and also gained nine corner kicks to Ottawa’s zero.

“We’re optimistic [about the team’s chances at the NCCAA Championships],” Brunelle said. “I know expectations are high, so we’ll try to live up to those and take advantage of this opportunity that has been given to us.”

Biola shifts their focus to the NCCAA National Championships which will take place in Kissimmee, Fla. from Nov. 27 to Dec. 2.