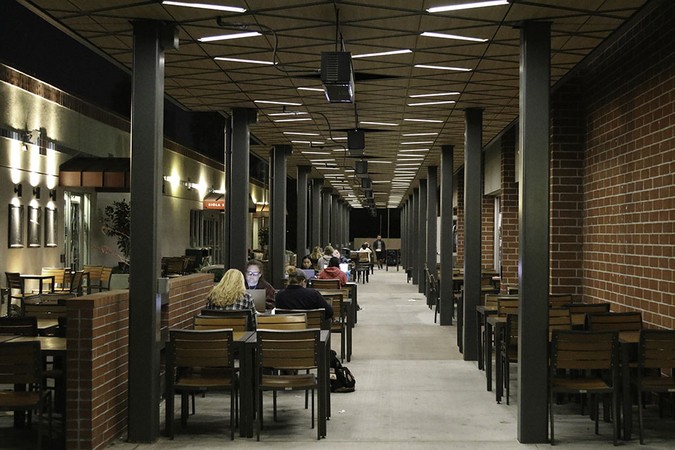 The patio area outside the doors of Common Grounds and Eagles’ Nestdoubles as a popular spot for students wanting to study outdoors, but construction got in the way of this frequented study spot and students had to find new places throughout campus to do their homework.

Whether there for a coffee date or to finish cramming for an exam, students would frequent the patio daily. During construction, the hunt for a new location to study led sophomore human biology major Sarah Jeffries to the Fluor Fountain. However, the new spot just did not feel the same.

“I was very upset for a while, but then eventually I moved to the fountain, but I really missed this spot to study,” Jeffries said.

Since its reopening earlier last week, students once again found themselves studying at the sturdy wooden tables or red lounge chairs offered under the shady covering.

“It wasn’t weird, I was just very surprised, because I thought it was gonna be closed for the rest of the semester,” Jeffries said. “But I was very excited when it opened back up again.”

For senior accounting major Ruben Pekary, this final semester means lots of lasts, including studying. The study space’s inaccessibility made it apparent to him just how much he valued the study niche.

“I thought I really wouldn’t care about it that much, but then, when it did get blocked off, I was like, ‘Shoot, it’s my last year and last semester,’” Pekary said. “I wanted to have the open space. I think it was one of those things that I didn’t really appreciate until it was gone.”

The location and atmosphere of the area continuously draws in students and faculty alike. Pekary believes that the nice weather and open space allow for an easeful environment for students to socialize studiously.

“Definitely the weather has been a factor. It’s just warmer, it’s nice and cool in the mornings. Afternoons are a little different, but also evenings are a lot nicer just to be out here,” Pekary said. “People walk through and everything. It’s nice to say ‘hi’ to friends every once in a while in an open space.”

Not only did the lack of space affect students’ ability to study, but also the consistency of customers at Common Grounds. Junior biology major Hazel Mancia works at Common Grounds and shared that the patio-turned-construction-zone meant her nightly shifts were a lot less busy.

“Commons used to be the ‘cool place to be,’ but it got really, really slow,” Mancia said. “Friday nights it was dead. There were times when I would be working my normal shift and get like 12 people [to] come in and out.”

With the patio now bustling, more people have started stopping by again. Mancia noted that while customers keep pouring in, walking through the pathway once covered in caution tape and large wooden barriers feels a little foreign.

“It’s definitely more full out here,” Mancia said. “I feel like more people are coming in, more people are staying because it’s nice. It’s a good change, it’s just weird because I’m so used to the tunnel and the construction. I got so used to it and now it’s like, ‘Oh my gosh, it’s open.’”