Barry Krammes will retire after over 30 years of teaching at Biola. 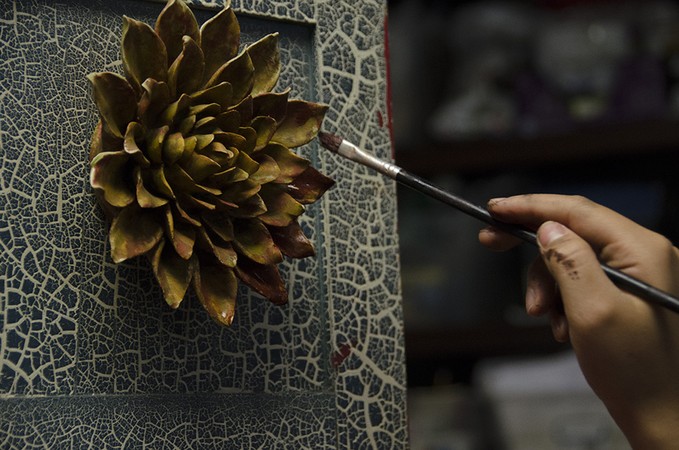 Professor of art Barry Krammes cannot imagine himself doing anything but art. He often states he might not be a Christian today if it had not been for art.

“I guess I feel God has called me to make this crazy stuff. And it is sort of crazy, you know, but hopefully, it will spark something in someone,” Krammes said.

After over three decades of teaching art at Biola, Krammes will retire, but not before displaying his art pieces—17 years in the making—in a show titled The Morality Theatre Project.

From Krammes’ youth, he experimented with many styles of fine arts, such as drawing and painting. However, when he reached college, his parents suggested he major in something “more practical.” After one very confusing class as a sociology major, he knew he needed to pursue art.

Once he convinced his parents to support his choice, he studied art at the University of Wisconsin in Eau Claire, Wis. Following his studies, he needed to find a job. He worked for a Christian book store but did not feel his passion ignited and soon realized he needed to make more money if he was to support his family.

SEARCHING FOR A CAREER

Eight years after receiving his undergraduate degree, he went to graduate school at the University of Wisconsin in Madison, Wis. When he finished, he again faced the dilemma of what career to pursue. His father had worked as a high school teacher. Consequently, Krammes never wanted to become one. However, as the pressures of bills encroached upon him, he decided to apply to 60 Christian universities for a teaching position—Biola included.

“Unfortunately, the arts and humanities don’t have easy career paths. But one of the most frequent choices for artists is to go into teaching. So I decided that I would do that. I enjoyed people and working with students,” Krammes said.

Soon after, he received a polite letter from Biola, informing him that they had no openings but would keep him in mind. Two weeks later, he got a call saying he was one of two candidates for the position of a full time art professor at Biola after one of the art faculty had suddenly resigned.

Eager to get the job, he flew out to California to visit the school and get interviewed in person. Honestly, he believes the main reason he got hired surrounded the fact that he was a Baptist, unlike his Foursquare competitor, and at the time, Biola had a somewhat anti-charismatic stance.

Now more than 30 years later, he can look back on his time as a professor and the process of creating his long-labored art.

“I’m graduating [laughs],” Krammes said. “I’m sort of burned out actually. Just ready to be done, and I think the Lord is moving me on… It’s been hard to be an artist at Biola, but I have some wonderful colleagues who are very precious to me and the students have just been so—Biola has wonderful students.”

While teaching has not always proven easy, he has greatly enjoyed the students and interacting with them. His favorite moments revolve around when he learned something from his students while teaching them.

Though he trained in two-dimensional work in printmaking, drawing and painting, he has spent many years focusing on the sculptural process “assemblage,” a French term referring to found-object art.

“I vasselate between being very frustrated with the pieces and very excited about the pieces, and depending upon my mood and how the piece is progressing, you know, I sometimes want to take them to the top of the roof and throw them off and see if that helps them, makes them any better,” Krammes said.

His faith has always driven his art, but in many of his pieces, Krammes said he likes to display the depravity of the world and the yearning for redemption. He shows this through found objects bearing imperfections, such as a hand missing fingers, to show humanity’s incompleteness.

“I guess maybe I’m speaking to God. I sort of see these as visual prayers. And one of my favorite passages is Romans chapter eight, where it talks about all of creation is groaning and longing for the day when they’ll see Christ and be with him, and the problems of this life will be no more,” Krammes said. “So I like that sense of travail and of expectation of, and I try to capture that in my work—that sense of longing.”

*Beginning on Wednesday April 25 until June 29, Krammes will display his artwork series titled The Morality Project at the Green Art Gallery on campus.