Dougher pursued her passion for dance through Mock Rock and took the gold for three years straight. 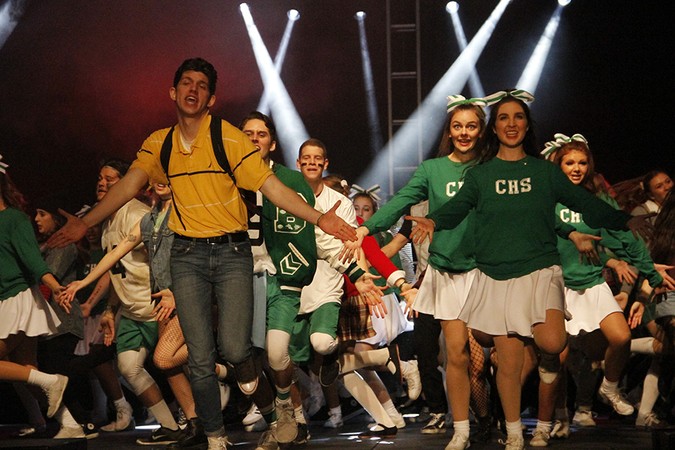 Cheers flooded the air as the team flew down the bleachers to the stage and accepted their trophy with jubilee. Friends in all smiles embraced and crowded towards the trophy chanting, “Hannah, Hannah, Hannah!” Senior math major Hannah Dougher’s own team APEX had won.

Dougher has given all four years of her Biola career to Mock Rock, joining Student Orientation Services for two years and creating her own team, Apex, last year in 2017. After her team’s victory on March 24, she took the trophy for the third year in a row.

“I’m just blown away because I was not expecting this at all and it’s honestly all God. Everything goes to God, and he has literally brought us to this point so I’m blown away,” Dougher said, shortly after hearing the results of this year’s competition.

Dougher, who began dancing at a young age and continued to become heavily involved in dance teams in high school, knew she wanted to join Mock Rock when she came to Biola. She found her chance when she got accepted into SOS in the spring of her freshman year.

“In high school I definitely danced a lot. So coming to Biola, I wanted that to continue, and so my sophomore year I joined Xopoc, which is one of the dance clubs on campus. Then through Mock Rock, I’ve been able to keep dancing,” Dougher said. “I love dancing. I love performing.”

In her first year, she learned the gist of Mock Rock—the choreography, the community, the late nights—and she even helped lead one of the scenes. The next year, she came back as a second-year SOS staff member. She took on a larger organizational role that year, which contributed to the infamous SOS triumph, as SOS had never won Mock Rock prior.

STARTING HER OWN TEAM

When her junior year came, she knew she wanted to participate in Mock Rock again, but she did not feel like joining another team. She decided to create a team of her own despite her doubts, and named it APEX. God gave her the conviction to take the risk of starting a whole new team and leading it through the process, according to Dougher.

“God really just put it on my heart, saying like, ‘Take a leap of faith, Hannah. Put aside all doubts about your abilities, all doubts about what you think you can do, and just start a team. I’ll be there with you every step of the way. I will help you through it,’ and he so did,” Dougher said.

She worked tirelessly that semester organizing her group and choreographing the dance, not knowing if they would even make it past the auditions. To the ecstasy of Dougher and her team, they won in their first year. Feeling she could not leave her team, Dougher again led APEX, though this year, she had a few co-leaders for help.

“This time around, it was kind of like I was able to have people around me that were experienced and were able to help me lead now,” Dougher said. “I carried a lot of it out by myself, and this year I’ve definitely had more leadership around me that’s able to support me and lead with me. So I am the leader still, but I have co-leaders around me.”

Like usual, the long nights of practice and meticulously correcting each movement to perfection made for an exhausted team and an ill Dougher. But their sweet Charlie Brown storyline, tightly synced steps and sleek costumes gave the team favor from the judges, and they took the trophy yet again, making Dougher a three year champion of the lip sync battle.

“It’s just been such a crazy road this year,” Dougher said. “I’m not gonna lie, it’s been hard at points and it’s been challenging mentally and physically putting back the team again, but overall it’s been still worth it.”

The team felt thrilled to have won two years in a row, crediting Dougher’s hard work and choreography for the triumph. The community they gained as a result of the act gave them an unforgettable experience.

“Honestly, it feels surreal. We never come into it thinking that we’re gonna win or take it and that’s never the priority, and so it just feels like such a blessing that we’ve had that opportunity two years in a row,” said Lauren Decker, sophomore psychology major and APEX returner.

The acts which bring such joy require tremendous effort, and the victory Dougher has enjoyed would not have occurred without God’s provision and encouragement, according to Dougher. Now she can end her Biola career with a bang, having lived her passion and led others with her to victory.

“It’s incredible. I’ve made so many friends and there were so many people who were in it last year. It’s just given me an opportunity to meet so many people and just have fun and dance and glorify God with our bodies,” said Hannah Mosley, sophomore business administration major and APEX returner.