Go behind the scenes of a Mock Rock production. 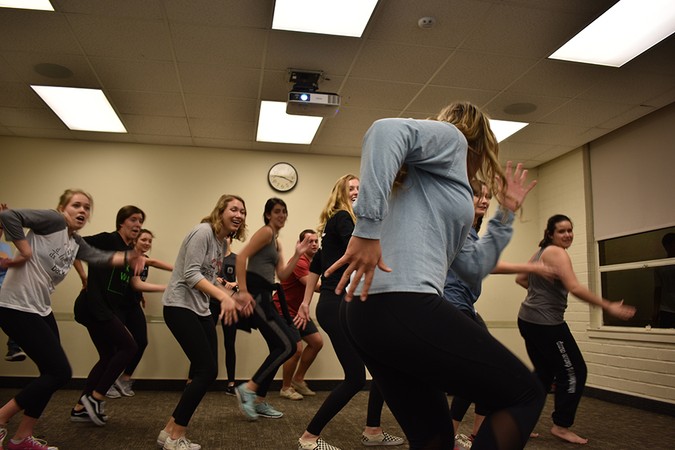 Entering the gym, the lights are down low with popular music blaring as the crowd settles down. A video placed above an empty platform welcomes the onlookers to the event. Moments later, the lights come up on the stage, and dancers captivate the audience. As each scene takes place, students’ feet stomp on the stage and lip sync on the catwalk, crafting an original story for Biola’s student body. It is a battle and an art all in one. It is Mock Rock.

If not on a Mock Rock team, this may be the only part of the process one sees. However, the process of each team includes much more. Team leaders must choose an overarching theme, songs for each scene, figure out the choreography for the whole production and even audition for Student Programming and Activities on top of a parking garage. Lots of practice goes into making Mock Rock possible.

“It definitely takes a village to build a Mock Rock for sure, especially if you want it to be this awesome, creative, super diverse production,” Nevarez said. “We meet with our crew leaders, like our second year staff members, and we just try to put together a plot and choose the theme. So we’ve chosen our theme and then we choose songs based off of the theme. Then we just start choreographing from there.”

Heroes team leader and senior Christian ministries major Gabriella Flores explained her team did the opposite of S.O.S. and chose its music first.

“We had the music before the theme necessarily,” Flores said. “That was a little more difficult and challenging because we already had set music but we didn’t have anything else, so we had to plan and work around that music that was set in stone.”

THE PROCESS OF PRACTICE

As with many refined skills, the first step to making something great starts with practice.

Practices take place in the classrooms of buildings like Rose Hall and Sutherland Hall. With chairs pushed to the side of the classroom or out in the hall, dancers and choreographers fill the room learning their specific scene. Each classroom blares a different set of songs with the choreographer yelling, “Five, six, seven, eight” and “Watch me,” before the intricate movements begin.

In the beginning, Mock Rock teams practice anywhere from two to four nights a week for about three to four hours. As the event gets closer and closer, practices extend to five days a week and to the wee hours of the morning.

Along with practicing, the leaders have specific dates for the theme, music, video and audio to meet approval. Though Mock Rock creates a lot of work for each team, many team members deem the experience as “worth it.”

“It’s some of the favorite memories of everyone on SOS,” said Caitlin Adams, SOS student director and junior Christian ministries major.

Each team will showcase the work they put in for Mock Rock on March 23 at 7 p.m. in Chase Gymnasium.