That Time I…joined the women’s march

Marching in solidarity with other women brought to mind thoughts about the church and feminism. 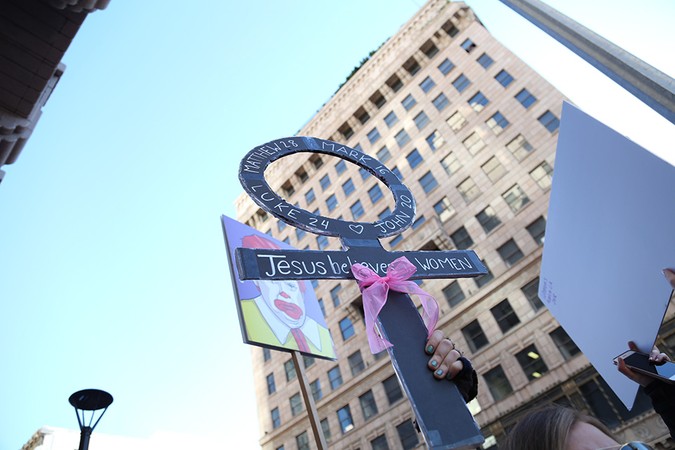 I think I have always been a feminist—not the man-hating, bra-burning type, but the equality for all type. Even from my earliest years, I pushed back against those who called me subordinate to men in the eyes of God. I was ambitious, feisty and determined to do something great in my life, despite the restraints put on my gender. Interestingly enough, I feel the church, or rather church members, gave the largest pushback to my aspirations. For this reason, I have struggled to reconcile my belief of gender equality with my Christian faith for years, but I have found a ground on which I feel comfortable. In fact, I have found a position I believe the church should consider, one that encourages women and recognizes them. This is the reason I marched.

My friends and I arrived in downtown Los Angeles at 8:30 in the morning. As we walked to Pershing Square, we passed parties of women—mothers, grandmothers, children, punky teenagers and artsy college students—often accompanied by supporting men and holding signs with pithy sayings and powerful quotations. We turned onto the street of the rally and into a sea of people sporting pink pussy hats, merchandise of the Pussyhat Project.

We soon got trapped into the swarm of people attempting to hear the rally speakers—a pointless attempt—and were surrounded until we could barely move our arms and legs. While the speakers talked on about listening to women’s voices, we laughed as the organizers clearly did not take their advice nor listen to voices of the claustrophobic crowd. I grumbled as someone’s rear end practically pushed me onto a table. I felt irritated. Just then my friend said she would much rather have the march be this full than have hardly anyone show up. She was right. I had complained about the number of people who cared so much about equality, when this crowd size would have brought tears to our ancestors who fought relentlessly for women’s suffrage.

Eventually, one of the organizers, a kind soul, pushed through the crowd to start the march. When I could finally move my feet, I joined the procession and felt the unity of this movement. As we marched through the wide streets of LA and beneath its intricate architecture, I read the signs of my fellow humans. Some had animations, many had curse words and political statements, all of which I appreciated. Although they did not share my same beliefs by any measure, I appreciated their passion and their thought-out opinions. We do not have to agree on everything to agree that women have intrinsic value and deserve equality.

My friend walked up to me to declare what a great march it was, and then asked, “Where is the church? Why are they not here?” We turned the corner and found we were wrong. The church was there—as counter protestors. My heart dropped. A lady behind me sighed, “Oh, there are the Jesus people.”

The counter protesters wore “Make America Great Again” T-shirts and held signs calling people to repent and turn to Jesus or go to hell. “There are the Jesus people,” that lady had said. Those protesters were not the Jesus people. The Jesus I know does not endorse a president who objectifies women, and he does not disapprove of women marching for equality or protesting against sexual assault. My friend shouted back to them, “Jesus believes in women!” The crowd in front of us cheered. It is true, Jesus does believe in women. Anyone can look to the multiple passages of Scripture where Jesus interacted and respected women in a society that did not, such as John 4:4-42 or Luke 24:1-8. Yet, those against women had the loudest church voice at the march.

I left the march thankful for the voice women have today, and for the men supporting our voice, and hopeful for the improving future of young girls. But I also left the march disheartened by those in my religion. Once again, it appeared my religion and women’s equality conflicted, but I know that is not true. In my lifetime of studying this topic, I know I am a valued member of the body of Christ, and my gender does not diminish my value. It heightens it. I did not agree with every agenda present at the march, and I did not have to. We can as the church stand in support of the good. We do not have to stay silent out of fear or out of comfort. In fact, we should stand up for the good, otherwise, we are missing the opportunity to show the relevance of the Bible and Jesus’ heart for the marginalized. I know my Lord, and he does believe in women.