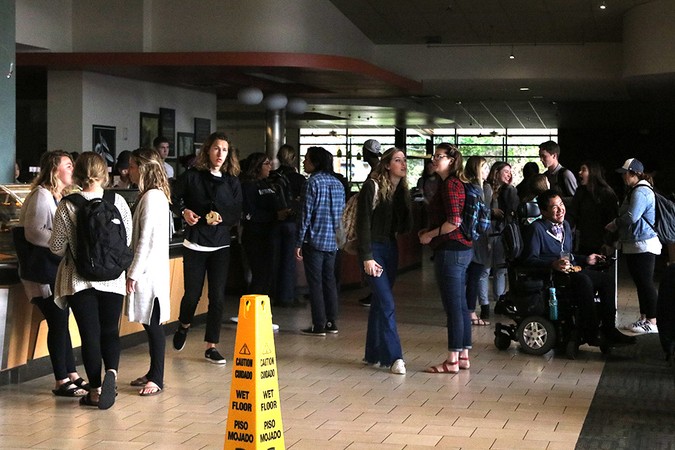 The active shooter simulation exercise started with a prayer. It ended with 22 confirmed dead.

Campus Safety regularly holds tabletop exercises and campus-wide lockdowns to keep students, faculty and staff prepared to respond to an active shooter threat. This spring’s exercise, which occurred Wednesday morning, came in the wake of the Parkland, Florida and Great Mills, Maryland school shootings, though they did not prompt the exercise itself.

“Every time it happens, we think that it can be that much closer to a Biola campus. God forbid it ever would happen here, but every time that incident happens across our country people… respond in shock: ‘We didn’t believe it could happen here.’ And so it’s our job to be sure that we are prepared,’” said Lee Wilhite, vice president of University Communications and Marketing.

Lee has a position on the President’s Cabinet, which participated for the first time as a unit. This allowed for greater coordination between the Emergency Response Team’s immediate actions and administration’s higher level decisions, including whether to cancel classes and how to notify the next of kin for the deceased. The tabletop exercise also involved over 30 departments, including representatives from the Los Angeles County Sheriff’s Department and Fire Departments.

“[Communication is] critical, because people want to know what’s going on… And because social media is what it is today, people are going to communicate as quickly as they hear something, so it’s not just getting accurate information out, it’s also responding and trying to step into that conversation,” Wilhite said.

During the tabletop exercise, Chief John Ojeisekhoba of Campus Safety provided a scenario to the ERT involving an active shooter in the Alton and Lydia Lim Center for Science, Technology and Health. As department representatives sprang into action, he delivered updates, presenting the ERT with additional issues such as multiple casualties, incorrect information circulating in the news and parents rushing onto campus.

After the final update, Ojeisekhoba instructed the ERT and the President’s Cabinet to form a comprehensive response plan to address the short-term and long-term concerns following the simulated shooting. While Ojeisekhoba believes the exercise proved successful, he also knows there always remains something to improve, including providing long-term support to traumatized students.

Once the attendees delivered their plan, Ojeisekhoba brought the exercise to a close and displayed camera feeds on a large television screen showing students exiting morning chapel. Ojeisekhoba then gave the word to begin the lockdown drill. The public announcement systems blared the warning as a group of students, faculty and staff squeezed through doorways. Soon after, the electronic doors locked.

Freshman psychology major Rebekah Stoltzfus believes drills such as these help students to prepare for the real situation, such as when an assault suspect came to campus.

“Earlier this [school] year when we had an actual lockdown, it was really helpful to know what to do and [I] felt much more safe that way,” Stoltzfus said.

The lockdown ended in minutes. The ERT and the President’s Cabinet watched as people bustled back into the pathways, safely continuing with their day. A shooter had not entered campus, nor had any students received gunshot wounds. However, Ojeisekhoba knows that no campus resides in total safety from violence.

“We pray that it never happens on our campus. But we also understand that no campus is immune, so everything that we do, all the training we do… it’s not new to us. We have ways to go, we have areas to improve, but we’re not playing catch-up. We’ve been building this up for the past eight years,” Ojeisekhoba said.