The Film Music Guild invited students to watch the awards ceremony and finish their homework. 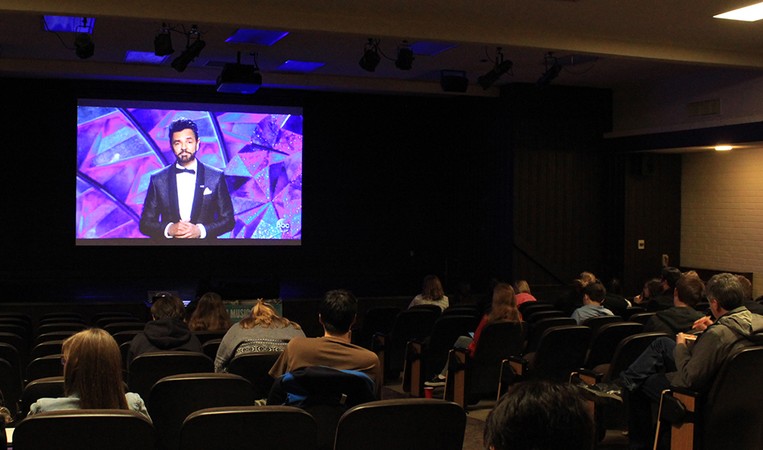 Vice president of the Film Music Guild and sophomore music composition major Jorden Davis sat in the back of Mayers Auditorium, eyes fixed on the bustling crowd of students as the 2018 Oscars ceremony projected onto the screen before them. His sight flickered between the two subjects, as if he was waiting for the reactions of his attendees, many holding a plate of chips in one arm and homework in the other, to provide as much of a show as the ceremony.

He did not have to wait long.

The auditorium reverberated with students’ cheers on March 4 as “Coco” won Best Animation and shook with hollers as BB-8 rolled onto stage with cast members from “Star Wars: The Last Jedi.” Between award presentations, many students turned their gazes downward at backlit screens to look up images of actresses’ dresses or used the interlude to catch up with spring break homework. Others jeered with friends at the absurdity of the commercials or chattered about their predictions for the next award.

“People really care, is the thing,” Davis said. “Whether it be the music, or whether it be the filmmaking—like the director—or even stuff like the cinematographer. There’s a couple people in here that are really excited about who wins that. So it was really nice having people where they could actually interact with that and not just look it up online.”

Junior kinesiology major Steven Kuo, who thumbed through his textbook as he watched the ceremony, echoes Davis’ sentiments. He calls himself an introvert, but decided to step outside of his comfort zone to share a common love for film and music with other students.

“Even though my major is not involved with film, I am pretty involved with movies and entertainment… and with music scores in particular. [I’m] pretty interested in that field. [It’s] not my career, but it’s a hobby I enjoy,” Kuo said.

Freshmen communication sciences major Tess Clark and cinema and media arts major Maralisa Ortiz sat in the front row. Neither hold membership with the club nor have seen most of the nominated movies, but they gasped and applauded nonetheless.

“I’m happy that they have food here. It’s a lot of fun. I’m glad that we get to do homework while we’re doing it,” Ortiz said.

Davis believes the event provided a space for students to spend some time in a relaxed environment without feeling forced to engage in a serious discussion about the subject matter.

However, after watching both the screen and the audience’s reception, he believes there remains a lesson to learn.

“It always strikes me how big of a deal that we make it,” Davis said. “We look at these things like the Oscars and award shows being so valuable, and they’re so inherent in our culture now, so it’s really interesting to see people’s reactions… If anything it reminds me that we need more personal interaction and less of the showiness of the world. As someone going into the media world, it’s a fine line.”