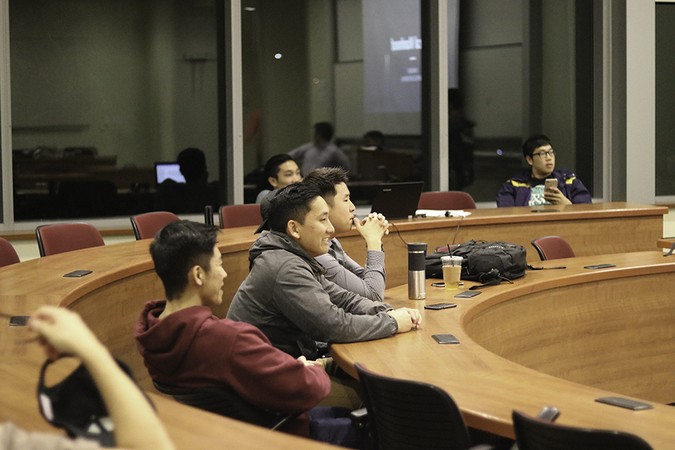 The Koinonia Campus Mission Club held a seminar on biblical manhood which encouraged students to pursue a deeper understanding of the Bible and spoke against sexual harassment of women.

The seminar began with a brief presentation listing several biblical characteristics for men, including selflessness and discipline, and scriptural support to call attendees toward standards of moral character. A Q&A session followed the presentation, with KCM missions director Daniel Nam and special events director Harry Lee discussing a few topics, such as leadership and relationships with women, before inviting attendees to ask questions.

“Biblical men are weak, but they understand they’re weak, but also they’re confident,” Nam said during the event. “It’s like a paradox, you know?… Our vocation, our status in comparison to God, that’s what wisdom is. We are low and yet we have been filled with this confidence and hope.”

Nam believes students may think they know theology simply because they have to attend Bible classes. However, he encourages students to remain intentional with their reading and understanding of Scripture.

“I think it might even be easier for [Biola students], and I think it’s easy for us to think that we are kind of in the word because our classes require it,” Nam said. “I was praying out loud, and then someone was like, ‘Why are you praying out loud?’ and I was like, ‘Well, God doesn’t hear you if you don’t pray out loud.’ … If you’re not saturated in the Word, you’re going to say stuff like that.”

During the Q&A session, the speakers addressed the topic of sexual harassment. Lee believes God’s calling of men to protect women extends to treating them with respect.

The club also held a simultaneous seminar for women on the topic of shame and emotional pain.

After the Q&A concluded, the attendees began a time of group prayer before closing the event and making dinner plans with each other.

Biological sciences secondary education major David Chei believes the event proved helpful for the men in the club, and hopes to see similar seminars in the future.

“I thought this event was very viable and it was definitely something that [was] really necessary for each individual person in the room,” Chei said.