Graham’s ministry has left an impactful mark on Christians today, including students and professors. 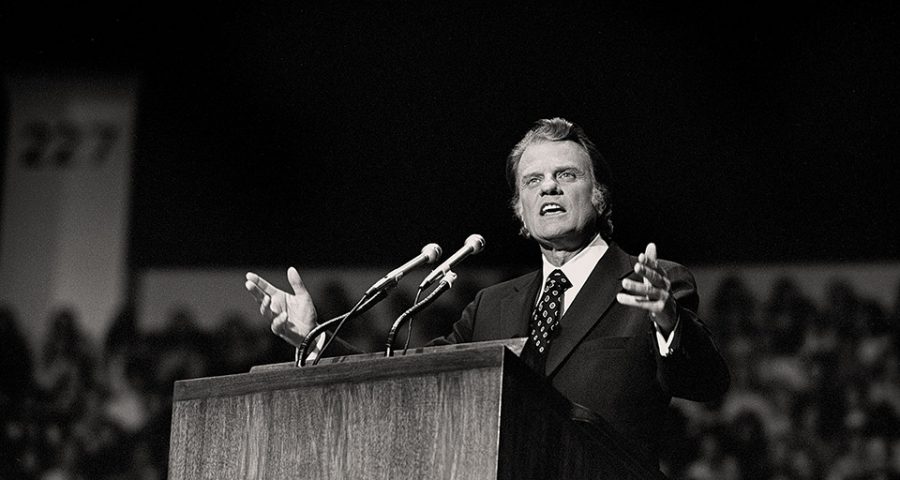 The stadiums filled with listeners eager to hear the encouragement of the gospel and a call to repent, eager to hear a message in which Scripture confronted culture. Then the microphone cracked, and a voice came booming through the crowds.

“The Bible says,” the Rev. Billy Graham would begin.

In his nearly 100 year-long life, Graham met with every United States President since Truman, received a Presidential Medal of Freedom, preached to the most people in history—over 215 million—and, most importantly, spread the gospel. Now after his death, many reflect on the life and impact of this preacher.

“You could argue that there’s no single person who’s had a greater influence in American Christianity and what it is today,” said Erik Thoennes, professor of biblical and theological studies. “Pretty hard to imagine someone preaching the gospel to more people in human history, including the apostle Paul.”

Someone once asked Graham, “What’s the first question you’re going to ask God when you get to heaven?”

“Why me?” He replied, curious to know why God chose him of all people to spread the message of the gospel.

Born in 1918, Graham grew up a humble farm boy in Charlotte, North Carolina and dedicated his life to Christ shortly before his 16th birthday. He began preaching in Florida while attending the Florida Bible Institute, but his preaching ministry began to flourish in the suburbs of Chicago following his graduation from Wheaton College.

He had no distinguishing attribute that would have necessitated the kind of ministry he led, other than the fact that God chose to use him, according to Thoennes.

“When I heard he passed, I couldn’t help but rejoice in the fact that God just blessed him and used him to spread the joy of the Lord to so many people,” said Lani Miller, junior kinesiology major.

God chose to use him in preaching, in growing the Christian church, in comforting a nation and in speaking wisdom into nearly every historical moment in the 20th century. His influential words portrayed the power, clarity and simplicity of the gospel—as well as the authority of Scripture, according to Thoennes.

Like many people, Thoennes’ main exposure to the church as a child came through Graham’s preaching. From his earliest years, his mom would sit him and his brother down and make them listen every time the evangelist came on television.

Years later, when Thoennes attended Wheaton College to earn a degree in evangelism, Graham presented him with the T. W. Wilson Award for evangelism in 1995.

Since Graham attended Wheaton College, they consider him their own, having since dedicated a building in his name. After his death, the campus filled with flowers in his memory, and the school held a memorial during one of their chapel services, according to Sarah Spaces, freshman communications major at Wheaton.

“A lot of professors ended up just remembering his life and encouraging us in the work he did because he was a Wheaton student,” Spaces said.

Spaces remembers going to one of his crusades when she was very young. She believes his impact lies not only in his preaching, but also in inspiring those who heard him to share.

“His movement was so big and so many people came to Christ from him,” Spaces said. “Remembering his legacy is important because you get to see how God works through us as fallen creatures and can make such a big impact on the world through our different gifts that he’s given us, and Billy Graham’s was speaking and preaching and teaching.”
THE LEGACY
Though many in the younger generation wish to move away from the religious traditions of their parents and the heroes of Christianity’s past, modern Christianity stands on the shoulders of sacred traditions and brave souls that people should not forget, according to Thoennes.

That farmer passed away on Feb. 21. On March 2, over 2,000 people gathered in North Carolina to honor Graham at his funeral, or what many have called his final crusade, before his body was brought to the Capitol Rotunda and finally buried in North Carolina.

In his own words, “My home is in heaven. I’m just traveling through this world.”