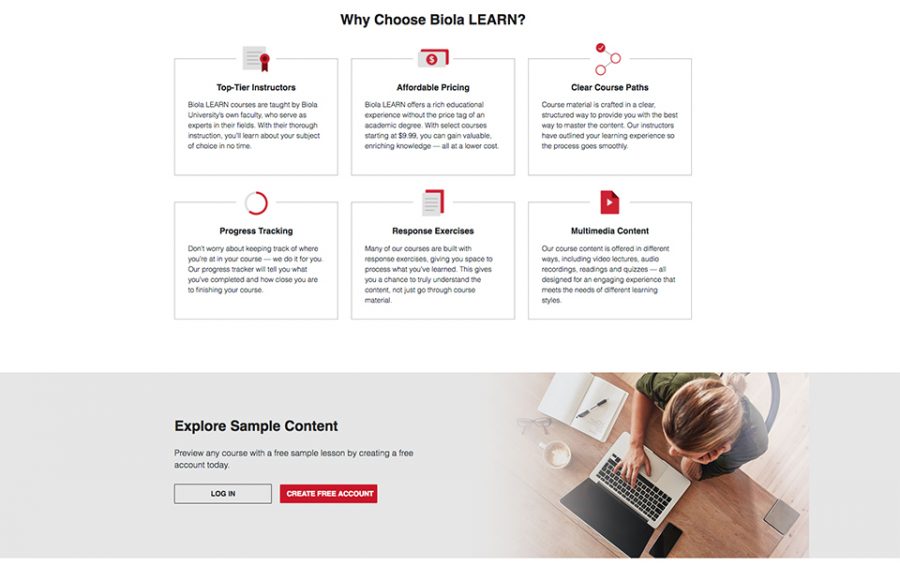 The benefits of Biola LEARN.

“We’re trying to be proactive and forward thinking on this. We’re also trying to do it in a way that… preserves the quality, meaning and integrity of a Biola degree, and so there’s a real focus on making sure that it is a robust learning experience for students that’s comparable to what you’re going to get in a classroom,” said Michael Pierce, vice president of university operations and finance.

Administration plans to use the funds over a four year period, scaling the amount utilized depending on how much online enrollment increases, according to Pierce. Online programs attract post-traditional undergraduates, students who complete higher education at a later age than most students and usually do not come onto campus. Pierce believes the additional funds toward online offerings will ultimately diversify Biola’s revenue stream as more of these students take online classes.

With this additional stream of income, an important focus remains on the future decline of graduating high school seniors, and therefore traditional undergraduate students, as well as a growing number of people over 22 returning to college, according to Pierce.

“Until this initiative, we weren’t doing anything to provide a quality Biola education to that population group. So I think it’s an opportunity for us to be forward thinking a little bit, ” Pierce said. “If we were not to do that, then the student that comes on this campus in 2024 through 2028—we’re a tuition dependent institution. And so they would be paying, I mean, you think your tuition is high now… There would be significant changes to how we can provide the education to the student.”

The number of post-traditional undergraduates at Biola remains at approximately 68 students, according to Ishii. However, she hopes the funding will help Biola meet its goal of having approximately 5,000 post-traditional undergraduate and graduate students by 2022.
UPLOADING INITIATIVES
Ishii believes that supporting online students remains different from supporting traditional students. Because of this, faculty often integrate small group interactions in their online classes, allowing students across the world to connect.

“It’s very easy for online students to feel very alone. They don’t have the benefit of this beautiful campus and the community that a campus brings, so you have to essentially create that community in a virtual environment,” Ishii said.

While freshman public relations major Jacob Allen believes the additional funds will prove a worthwhile investment, he believes his own experience with taking an online class remained lackluster.

“I think that Canvas is very hard to run an online class through, and it’s more just assignments than being taught and learning, but I think it might also just be the class,” Allen said.

Nonetheless, Allen also believes the student interaction through the online class remains beneficial to the experience.