Eagles take down Concordia in a five-set instant classic. 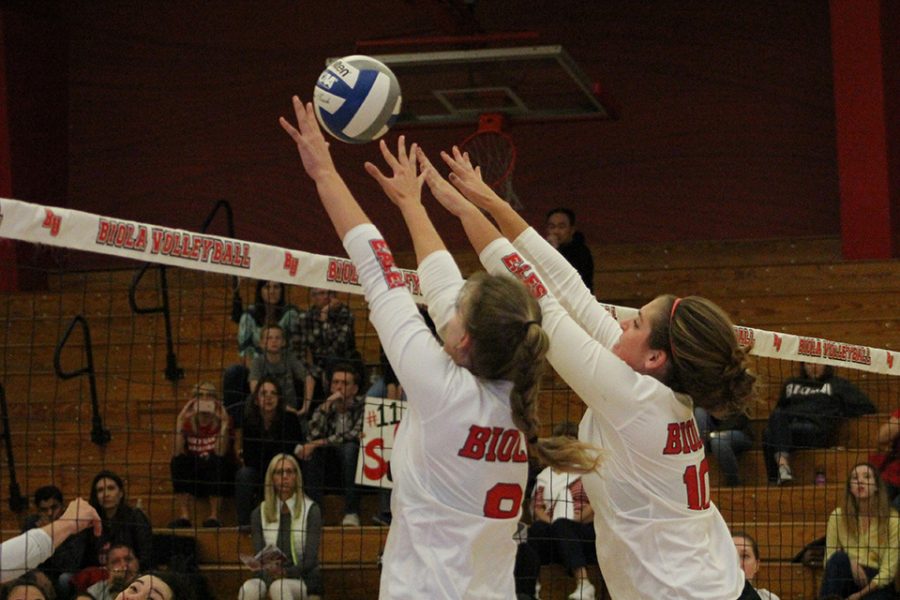 Biola volleyball returned to action at home in a PacWest battle against the Concordia University Irvine Eagles on Nov. 8. They came away with their second five-set win over Concordia in the season in a well-played match.

AN INSTANT BATTLE
In the first set, Biola took an early 9-8 edge on a kill from sophomore outside hitter Sabrina Winslow. With her team trailing, junior middle blocker Sierra Bauder led a three-point run to tie the score at 20 and Winslow closed the set out on a kill 25-23.

Set two began much like the first, with the two teams fighting to an 8-8 tie on a kill from Bauder. A three-point run put Biola on top 18-17, but a scoring streak from Concordia gave them set point at 24-2, and Concordia eventually finished the set on a kill to win it 25-21.
BACK AND FORTH AFFAIR
In the third set, several Concordia errors kept Biola in the set, and a Winslow kill later in the set closed the score to 13-10 as Biola looked to even the match. A four-point run led by an ace from freshman middle blocker Bekah Roth put the Eagles on top 20-18, but Concordia dug down for seven of the next nine points to take a 25-22 set win.

Determined to push the match to five sets, Biola came out focused in the fourth set. Another kill from junior outside hitter Hannah Van Warmerdam broke a tie as the Eagles took the 15-14 lead. Later in the set, Biola took a commanding 22-16 lead on an ace from freshman libero Sami Hover. A Winslow kill forced a fifth set as Biola took the set 25-19.
A JOB WELL DONE
Biola took an 8-6 lead in the deciding fifth set on a Winslow kill. A beautiful tip from junior setter Brinley Beresford put the Eagles on top 11-8, but Concordia fought back to tie the score at 11. Kills from Winslow and junior opposite hitter Karly Dantuma gave the Eagles a 13-11 advantage, and they sealed the match on a block from Bauder to win the set 15-12.

Winslow led the offense, racking up an astounding 20 kills while Bauder finished with 12. Beresford notched an incredible 51 assists.

“The communication we had on all our different blocking assignments and schemes, we had to talk each and every play of where we were focusing our blocking,” said senior libero Tess Van Grouw. “With the blocks that we were setting it made it easier to defend around it.”

Bauder picked up six blocks, followed by four from Beresford. Van Grouw had 22 digs while Winslow chipped in 15.

The Eagles play for the second straight night at home against Hawaii Pacific University at 7 p.m. on Nov. 9.