A freshman suffered a biking injury after a car almost struck him as he exited Lot H. 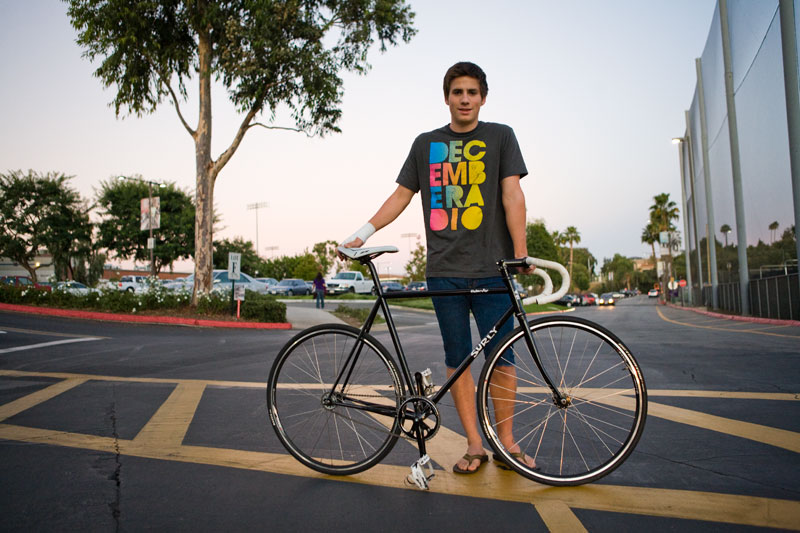 A routine bike ride from the library to Hope Hall turned into a trip to the hospital for freshman Caius Rickard Sunday night after he nearly collided head-on with a car.

At around 11:30 p.m., Rickard, who was turning right out of Lot H, near the bookstore, had to swerve sharply to avoid a car turning left out of Lot F toward him, sending him and his bike into the ditch by the baseball field dugout. Rickard struck his head on the back of the concrete dugout wall, rendering him unconscious for a brief period. The car, which hadn’t come to a complete stop at the stop sign before turning, left the scene, according to Rickard and Campus Safety officials.

“I saw it [the car] coming down the hill,” Rickard recalled. “As soon as I realized that [it] was going to pull out in front of me, I was like, ‘I can’t believe this is actually happening.’ I’d heard about people crashing but I never thought it would happen to me.”

A girl near Hope Hall’s basketball court first saw the incident and rushed to Rickard’s side. Rickard soon regained consciousness and was able to communicate with a Campus Safety officer when he arrived on the scene. Rickard, who wasn’t wearing a helmet at the time, sustained a concussion, a sprained wrist and minor cuts. An ambulance rushed Rickard to a hospital in Whittier, where he received seven staples to his bloodied head. He was released from the hospital several hours later, around 4 a.m. Monday.

Both drivers and bicyclists need to exercise more caution in instances like these, said John Ojeisekhoba, chief officer of Campus Safety.

“Responsibility falls on both sides,” he said.

As to the vehicle that left the scene without checking Rickard’s condition, Campus Safety is “currently investigating that to try to look into that further,” Shelby said.

Campus Safety officers were concerned by the incident, especially since they have noticed an upward trend in the number of students who use bikes as a means of transportation around campus in the past couple of years, said Justin Shelby, public information officer for Campus Safety. Ojeisekhoba echoed those concerns.

“We are very sorry that somebody got hurt,” Ojeisekhoba said. “He got the brunt of it.”

Rickard said he saw the car coming down the hill, but thought he “was good to go” and had plenty of time to turn, he said.

“There wasn’t a [stop] sign, which is what I usually check for,” Rickard said.

Lot H has the word “Stop” painted in large white letters, but no standing red sign, unlike the corner by Lot F, where the car was coming from, which has both the painted word on the asphalt and the standing sign.

While the bicyclist was still required to stop in this case and it’s Facilities’ responsibility to post stop signs, Shelby said that, “given the circumstances, that’s definitely something we [Campus Safety] will look into.”

Drivers of vehicles need to exercise more caution, too, Shelby said, as another student was nearly hit by a car on the crosswalk between the baseball field and the hill leading up to Flour Fountain a couple weeks ago.

Campus Safety will be enforcing fines more strictly in that area between the hill and the baseball field — especially for failure to stop at a stop sign, excessive speed and failure to yield to a pedestrian, Shelby said. Each of these infractions costs anywhere between $30 and $100.

Rickard, a member of the swim team, can’t swim until after he gets the staples from his head removed Sunday. That means he’ll have to miss the Malibu Invitational this weekend. He hopes, however, to swim for the meet on Halloween at APU.

Despite a bent handlebar, bent crank and bent wheel, Rickard’s $1,200, four-month-old bike, is “still rideable,” he said. The damage will cost at least $200 to repair, according to his estimates.

Rickard, who has already ridden his bike twice since Sunday’s incident, said his accident won’t stop him from riding, although he’ll be sure to wear his helmet in the future.