Things were anything but dull as the acclaimed William Lane Craig and Christopher Hitchens debated the question of God's existence in front of 10,000 people across 30 states and four countries Saturday night. 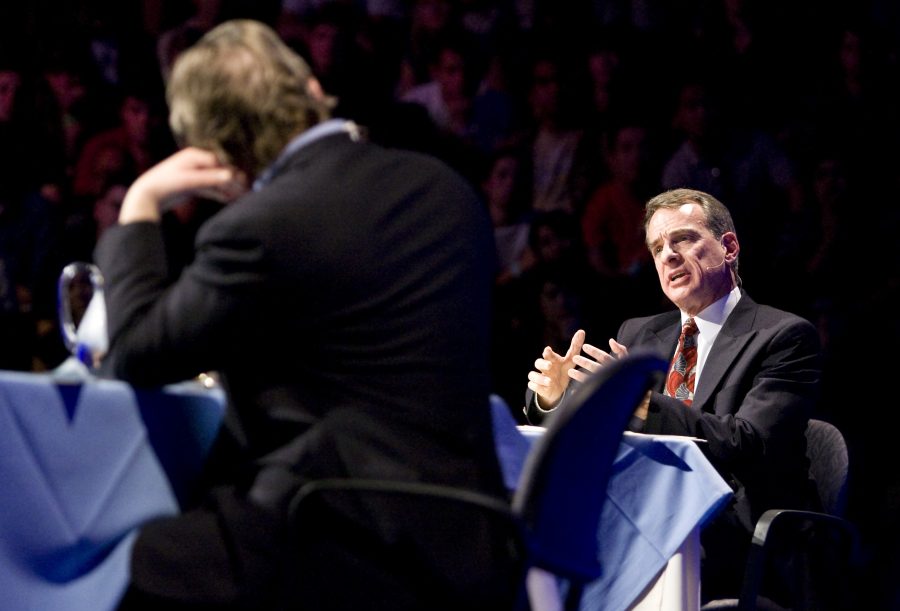 William Lane Craig directly addresses a question given by Christopher Hitchens in the 'Does God Exist Debate' held at Biola University on April 4, 2009. *Photographer: Kelsey Heng*

Things were anything but dull as the acclaimed William Lane Craig and Christopher Hitchens debated the question of God’s existence in front of 10,000 people across 30 states and four countries Saturday night.

The Biola community certainly wasn’t the only one represented in the crowd. Student press from academic institutions like Westmont College and Cal State Fullerton as well as spectators from places like Placerville, Calif. and Phoenix, Ariz. traveled to witness the event. Both Craig and Hitchens expressed enthusiasm and gratitude for the invitation to dispute each other’s views in front of thousands. Craig Hazen, director of Biola’s Master’s Program in Christian Apologetics, commented on his gratitude especially for Hitchens’ arrival.

“We are delighted to have Mr. Hitchens here on campus, but we realize that we theists certainly have the home court advantage,” he said.

In front of the 4,000 viewers on Biola’s campus – 500 of whom were Biola students – Craig emphasized his five main points for the existence of God. He mainly argued from his two contentions that no good arguments exist to prove atheism, and plenty of arguments exist to support theism. Hitchens, on the other hand, attacked the institution of religion and proposition of God’s reality.

For Craig, the issue of discerning the foundation for moral assumptions remained key throughout the debate. In Craig’s mind, Hitchens failed to articulate how atheists can cite reasons for attaching a moral rightness or wrongness to man’s actions in a solely material world. Hitchens retorted that man doesn’t need a supernatural being to prompt him as to how he should act. Hitchens said he has yet to discover a good action religious people undertake which atheists cannot, asserting especially that Christianity does not necessarily make people behave better.

Not one to shirk form using colorful and potentially offensive language, Hitchens said a God who waits thousands of years to intervene in the plight of humanity is a “cruel,” “capricious,” and “incompetent” being indeed. Craig attempted to rebut this statement by claiming that a mere two percent of the people ever to have lived was born before Christ’s arrival on earth.

Craig ultimately asserted that Hitchens had failed to offer arguments for “positive atheism,” instead focusing on debunking the existence of God in a cruel world. In Craig’s mind, atheism is no more tolerant than Christianity, as it claims to be the only true set of ideas. To Hitchens, however, atheism is the ultimate offer of freedom from the clutches of a totalitarian higher being.

“Emancipate yourself from the idea of a celestial dictatorship and you’ve taken the first step toward becoming free,” he said.

Students from all over offered their opinions about Biola’s reception of Hitchens after the widely publicized debate.

“I was a little concerned coming into it, but I knew that students and faculty would rise above any disagreements and emanate what a Christian university should be. And I think they did,” said Carizza Sioco, a sophomore from Westmont College.

Students felt that Biola treated their guests courteously and maintained its reputation as an institution with an accepting community.

“I was impressed and felt like Biola treated Hitchens with respect, which is atypical of us. Christians tend to be intellectually snobbish,” said Mark Harbison, a Biola freshman.