After years of development, the 32-acre park opens to the public. 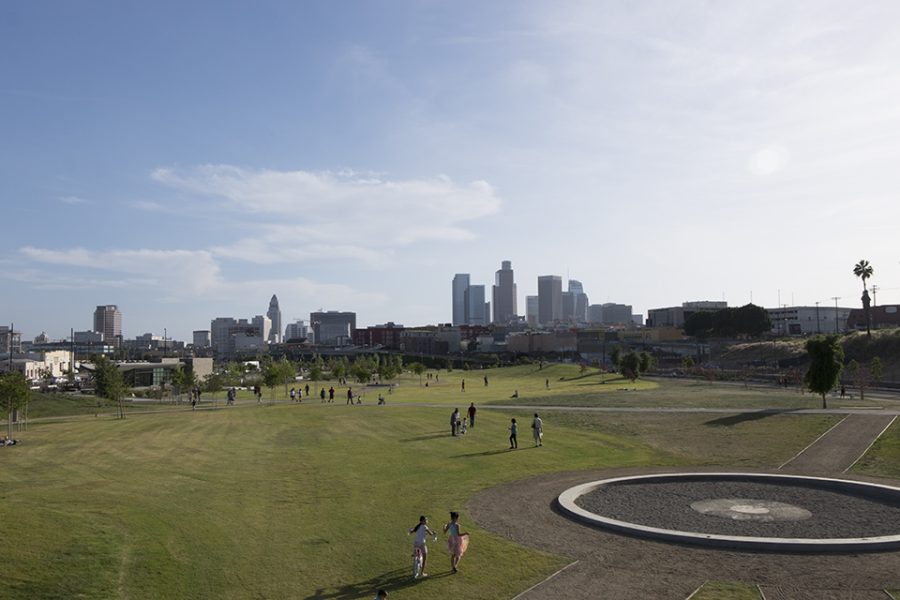 After years of development, the 32-acre park opens to the public.   |   Courtesy of Tim Seeberger

The park, open from 8 a.m. to sunset, is situated near an industrial park in Chinatown. The park is extremely accessible, just a stone’s throw away from the Chinatown stop on the Metro light rail gold line and offers bike racks in the park so people can bike instead of driving. It offers amenities such as multiple walking paths that can be used for running, biking or horseback riding. Two walking bridges also run over the park lawn, offering a spectacular view of the Los Angeles skyline. The park contains public restrooms and a snack shop — it is even dog-friendly, if the dogs are kept leashed.

The park is wide open, just waiting for families and college students to spread out onto the massive lawn in the center of the park. On the second day of its opening, the park was full of visitors sprawling out on the lawn, marveling at the greenery that acts as a safe space in the never-ending urban sprawl of the city. The northern end of the park features a small reservoir and a creek that runs out of it through the park and will be filled with water sourced from the LA river.

The California State Park also features a miniature grove of fruit trees anyone can eat from. The garden is part of a public project called the Endless Orchard, a movement created by art collaboration Fallen Fruit, which promotes planting trees among neighborhoods and city streets that allow anyone to eat fruit from. The central hub of the project, named the “monument of sharing,” is located at Los Angeles State Historic Park.

A step in the right direction

This park is a step in the right direction for making Los Angeles a greener city, but the process of opening this park has been a long time coming. The land was officially acquired in 2001 by California State Parks after the nearby community protested because the land was supposed to be acquired by private contractors.

After acquiring the land from what used to be an eyesore of a rail yard that shut down in 1992, California State Parks sought to turn it into a place of healing and rest for Angelenos where they could share the history of LA, both bad and good.

The park itself sits on historic land. During an excavation, State Parks archaeologists found the foundations of a hotel built by railroad tycoon Southern Pacific Transportation Company from 1875. The popularity of the railroad company in Los Angeles pushed them to build a hotel that would offer waiting rooms and fast meals for guests. This fact adds to all of the history found in old buildings and ancient villages which surround the park.

From 2001 until now, funding problems and pushback from contractors have plagued the building process of the park. In 2006, the project took a step in the right direction when it was declared a state park by the California State Parks Foundation and 13 acres of this land was open to the public for use. Although this was a step in the right direction, it often closed in the summertime for the use of events such as popular alternative music festival FYF Fest.

Now, the park is open for all to use after the completion of a $20 million renovation, which began in 2014. The culmination of this project brought new life into the park through installations of different plants and trees, along with dirt and concrete running paths. The grand opening featured Grammy award-winning artist QUETZAL, Subsuelo and Taylor McFerrin as musical guests and a day of food trucks and family activities.

On top of opening up the lands for people to use as they want, Los Angeles State Historic Park will also be open to host various events on its grounds. On April 29, Street Food Cinema hosted a viewing of La La Land at the park.

The park is a great place to stay while waiting for an Amtrak or Metrolink train. The park is also surprisingly close to Dodgers Stadium, as the lights of the stadium can be seen just over the hills near the park.

LASHP is a community-based park designed with the people in mind for all to use. It is a place that will constantly grow to help Los Angeles become a greater and greener city