Begin or end any road trip with the rugged coast of Big Sur. 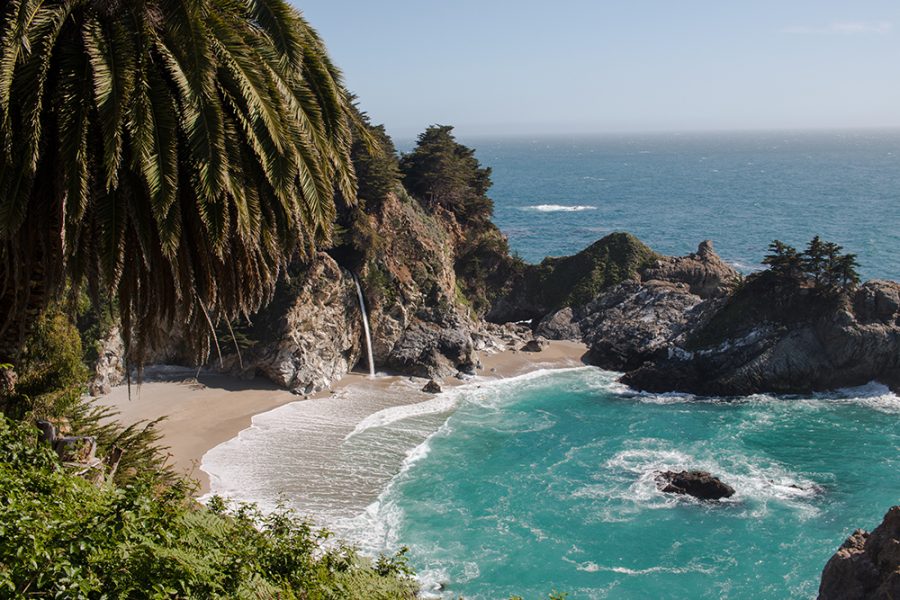 The famous falls meets the tide when it is high, but used to only crash into the ocean before a fire in 1983 and a landslide in 1985 altered the terrain. | Amanda Sakowski/THE CHIMES

It is 5 a.m. and before the crack of dawn — much earlier than any college student should ever be awake. I roll out of bed to a pre-planned outfit, apply makeup in an attempt to rid myself of my zombie-like state, throw breakfast together and head out to pick up Candace Guereque, senior journalism major.

A Big Sur Welcome
We quickly toss all of her gear into my car and embark on our nine-day journey. Our first leg of the trip: Big Sur.

We decided the best route to take was the 101 to Morro Bay where we would switch to Highway 1 since it provides one of the quickest ways to Big Sur.

After three hours of driving and a stop at Taco Bell for breakfast, we quickly approached a seemingly endless beach. Waves crashed for miles and the sun began to peek out of the clouds, welcoming us to Big Sur.

Despite the region having a town named Big Sur, the term also refers to 90 miles of coastline stretching from San Carpoforo Creek to Carmel River. Derived from the Spanish term for the region, “El sur grande,” Big Sur has no official boundaries and is one of the most popular destinations in California.

Visitors have the option of driving north or southbound along the single lane highway, and I recommend the latter. Both feature spectacular views, but the southbound route allows the driver and passengers to experience the beauty without stopping at each vista point.
Elephant Seals
We took the northbound route for our trip, making our first stop a visit with the elephant seals. Elephant seals often frequent this spot, as it provides the perfect place for the animals famous for their elephant-like snouts to mate and raise their pups. Whether heading southbound or northbound, seeing these creatures is a must.

My last trip to Big Sur in January was during the time of year females give birth to their pups and now just two months later in late March, the same pups I had seen were returning to the beach to molt. Experiencing the cycle of life firsthand instantly reminded me the best “zoo” is found in the wild.

After snapping a few pictures and fawning over the adorable pups, we hopped in the car to experience more of Big Sur.

As we continued on, giant cliffs were beautifully, yet ironically, covered in an invasive yellow mustard and met a seemingly endless ocean, which made the curvy highway not for the faint of heart.
Admiring the view
We drove for hours, making the occasional stop to take pictures and admire the view — not letting time stand in our way. A quick visit to the famous McWay Falls was a must, which is a picturesque beach featuring an 80 foot waterfall and one of the most popular stops in Big Sur.

Bixby Bridge, built in 1932 and one of the tallest single span bridges in the world, was our last stop for the trip. Big Sur features many bridges along the 90 mile stretch, but this particular bridge is the most photographed.

Although Highway 1 is not for the inexperienced driver, Big Sur and its otherworldly views should be at the top of anyone’s bucket list.