Life in the valley of death

Rare super bloom cause life to spring from a dry, barren valley. 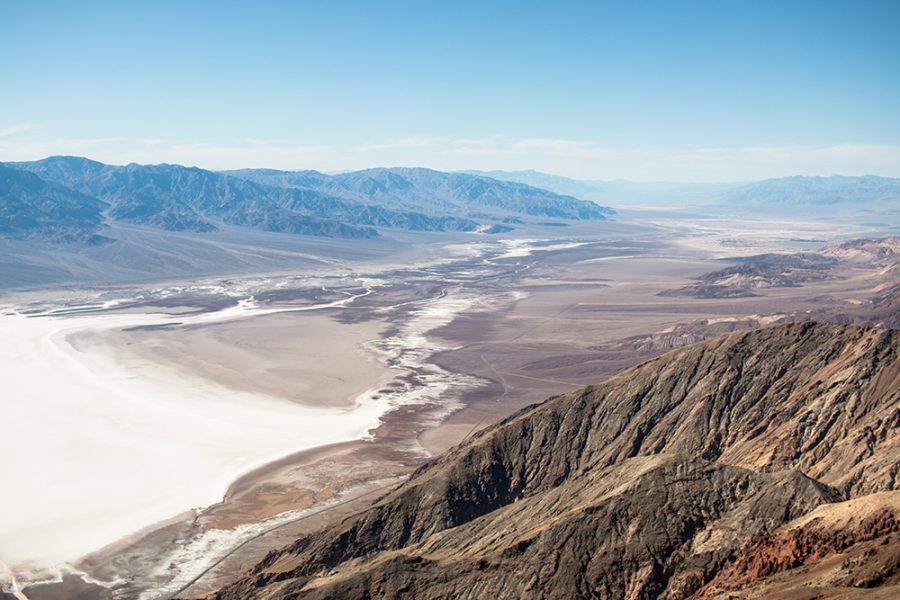 If you have been near social media lately, you may have heard about the yellow wildflowers blanketing  Death Valley National Park. As a national park frequenter and landscape photographer, seeing this phenomenon that happens only once a decade with my own eyes was a must.

A daunting drive
An above average amount of rainfall, a result of the the infamous El Niño, causes the so-called super bloom and happens once every 10 years, according to the Huffington Post. In one of the hottest, driest and lowest places in the United States life springs from the valley, filling the sun-baked earth with gold flowers. This contrast between life and death is one of the reasons why this decennial occurrence is well worth the visit.

I rallied together a group to make the four-hour trek for a glimpse of the flowers. The long drive may seem daunting, but with friends and good music, it is quite enjoyable.

We left at seven in the morning hoping to arrive at the park around noon, but the vast amount of beauty outside the park distracted us and we did not hesitate to stop for pictures. Our frequent stops along the way caused a two hour delay, but were beyond worth it.

One of the girls in our group, senior film major Samantha Olson, said, “It’s not about the destination, it’s about the journey.”


Descent into the park
While driving to the park, I foolishly stated we did not need to step foot inside Death Valley because the drive there was just as beautiful — boy was I wrong. As I made the descent into the park, I was suddenly surrounded by towering mountains that varied in color and bright flowers bringing life to the valley.

I will admit I did not have huge expectations for this park as I often prefer the national parks made up of forests, but this quickly changed seconds after driving into Death Valley.

This park differs from the others by lacking a ranger station at the beginning and requires visitors to pay at a self-service station. I recommend paying the entrance fee as funding for national parks is scarce and half of all national park roads have fallen into fair to poor condition. This fee helps repair and maintain roads, trails and park buildings. With that, we paid our fee and drove off to Dante’s View.


Breathtaking views
The view is about 15 minutes from the park entrance and although out of the way, it is one of the highlights of Death Valley. This breathtaking view sits 5,000 feet above the valley floor and overlooks the salt flats of Badwater Basin, among one of the largest protected salt flats in the world.

We spent most of our time in this area taking photos and hiking. It makes up a small part of the park, but its amazing view justifies allowing an ample amount of time to explore.

After Dante’s View, we headed off in search of the ranger station and the wildflowers, but more breathtaking views soon stopped us. I never imagined this park to have such a variety of terrain due to its classification as a desert.


Short of former glory
The group decided to make a stop at Twenty Mule Team Canyon, which reminded me vaguely of Munra Point in Oregon, as both locations require visitors to navigate a narrow trail along the top of the mountain. We opted out of hiking to the top with the determination to find the wildflowers and beat the sunset.

We made it to the ranger station 15 minutes before closing at 5 p.m., received a map of the wildflowers, and started our 10-mile trek. As I got in the car, I realized the map also had information on the back revealing bad news. The hot weather and lack of rain, along with a strong windstorm, had stressed the flowers, now “only a shadow of their former glory.”

The flowers were indeed short of the former glory and were not “super,” but still cast a yellow tint across the valley as the last light of the golden hour sank below the mountains in the horizon.

Although most of the flowers are gone, Death Valley is a must-visit place for any beginning or experienced visitor of national parks and now sits at the top of my list. The long drive is worth the endless hills surrounding the lowest point in North America and the variety of terrain found within the 5,219 square mile park.