Trek to the summit

Augusta McDonnell takes the Outdoor Report up to the summit of Mt. Baldy in L.A. county. 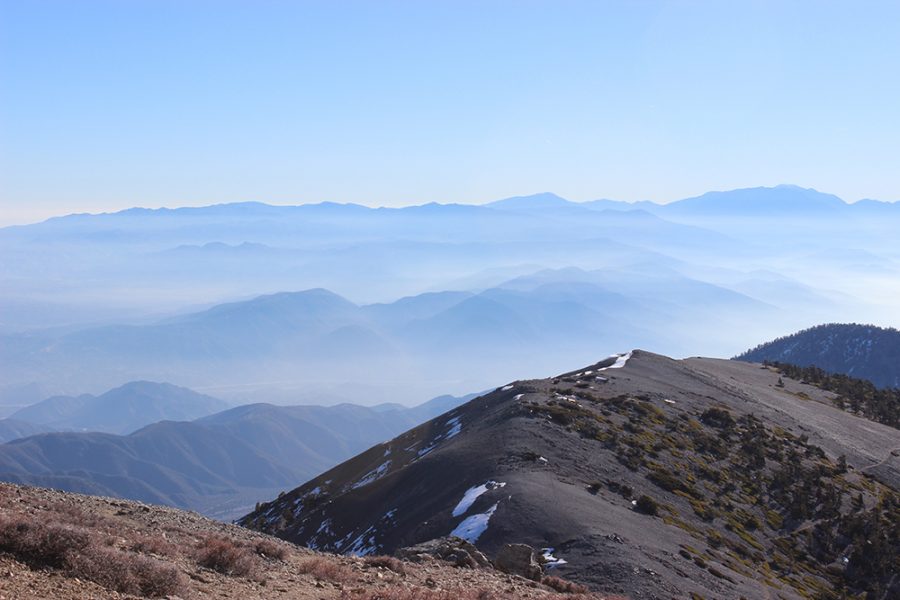 Hiking to the summit of the highest peak in Los Angeles County requires preparation and stamina, but the reward at the top is most definitely worth it. Mount San Antonio summits at 10,064 ft. in the San Gabriel mountain range as the highest peak in Los Angeles County, offering stunning views 360 degrees around on clear days.
MT. BALDY
Commonly known as “Mt. Baldy,” San Antonio challenges hikers with interesting trails traversing across varied terrain. The peak caps with a final scramble above the timber line, up broad faces of crumbling shale where spare landscape evokes Martian-like imagery.

There are several different routes accessing San Antonio summit. My friend Beth and I took Devil’s Backbone Trail, which offers twisting switchbacks and slopes. Summiting the peak involved two attempts, the first on Feb. 7 and the successful second trial on Feb. 18. Rapidly changing weather conditions during the first attempt caused us to turn back within short distance of the peak.

On Feb. 7, we left Biola at 4 a.m., hoping to catch the rising sun as we ascended the mountain. We anticipated cold temperatures and snow, and dressed in layers, with boots and windbreaker pants and jackets. We connected with the trailhead by parking on the far end of the Mt. Baldy ski-lift parking area, about an hour and a half from La Mirada.

From there, hikers enter the trail by way of a closed service road. This primary stretch is a steep climb up an old two-track, where run-off has dissolved the hard-pack into a mess of loose rock. After a short distance, the road intersects with a newer service road, Mt. Baldy Loop Trail, at 6,925 ft. elevation. Heavy fog made for eerie scenes and limited visibility as we gained elevation. Taking a right, we followed the Loop Trail for about three miles, walking briskly up the winding road until we arrived at a lodge called Top of the Notch restaurant. This lodge is located at Baldy Notch, about 7,800 ft. elevation, and serves diners who either hiked or rode the Sugarpine chairlift to the restaurant.

We linked up with Devil’s Backbone Trail after following the service road past the restaurant, passing under one of Mt. Baldy’s vacant ski lifts. From there, only two and a quarter miles remained between us and the summit.
CLIMBING DEVIL’S BACKBONE
The trail climbs steeply until topping out at Devil’s Backbone, a skinny ridgeline snaking across the rim. Steep drop-offs on either side are covered in scree, loose rock. This trail is completely accessible in summer, but can be tricky to navigate at night or during the winter. Beth and I encountered massive drifts across the entirety of Devil’s Backbone, and conditions grew increasingly worse as we gained elevation.

Though well-equipped for the cold, we did not have crampons or poles necessary to traverse much farther past the timberline, where high winds raked across the rocks and were powerful enough to cause missteps. In this situation, we decided to play it safe, because the extra risk involved further exposing ourselves to the elements.  We retreated back down the trail, making our way through the drifts and back down to the car.

The successful attempt on Feb. 18 also began early, leaving Biola at 3 a.m. with my friend Rachel. We observed the sunrise from the east end of Devil’s Backbone. Basically all snow and ice had melted off the mountain. We summited San Antonio to sunshine and clear skies. Dusty trails replaced the previously arctic conditions I encountered two weeks earlier. The air is still crisp, but temperatures in the low forties make for a beautiful hike.

Changing weather on the mountain is variably extreme, from a winter wonderland to full-blown spring in two weeks. Transitioning from chill temperatures to the warmth of La Mirada in less than two hours shows what a difference changing elevation makes.