Kayla McCabe reflects on the effects that art can have when dealing with conflict. 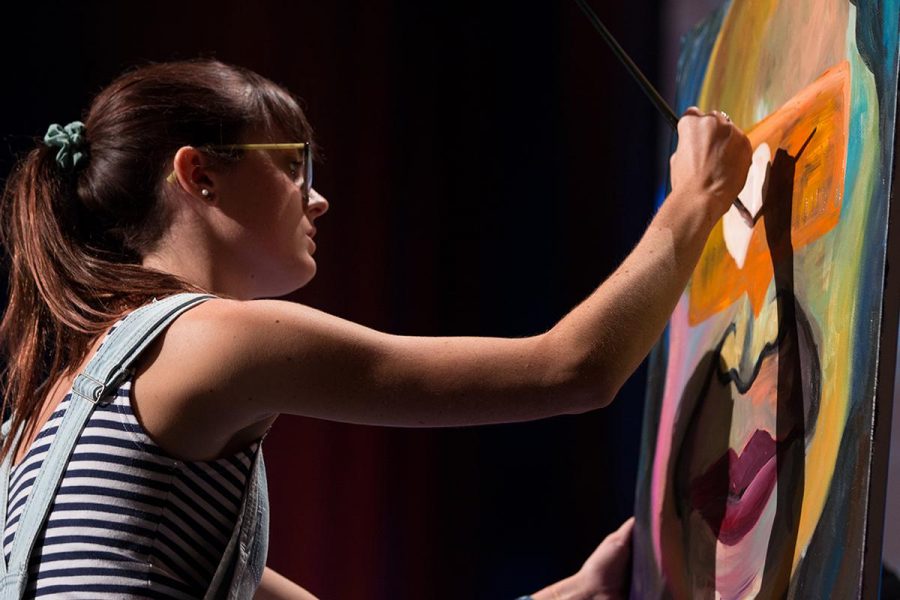 Biola alumna Kearci Moir painted on stage while each person spoke at the final session of the first day of Torrey Conference 2014. | Karen Jensen/THE CHIMES

Conflict is a tricky topic. We choose to go about dealing with it in different ways. Most of these ways involve vocalizing our concerns to others, which can be extremely daunting.

Wednesday night, students received the definition of “conflict” in a new way when they attended, “Redemption Explored Through the Arts.” This session, located in the Chase Gym, consisted of several speakers giving their piece on redemption or conflict. The personalities ranged from current Biola students, to a CEO of a major urban ministry. Students in the audience also had the chance to interact with the session. They could text in questions to ask the speakers during a Q&A or tweet with the hashtag #torreyARTSNight.

The first talk was given by Reverend John Hughes, the CEO of Metro United Methodist Urban Ministries. His outreach ministry takes place in impoverished regions of San Diego County and has had rigorous experience in the area of conflict. He discussed how his focus used to be on the question of how we get people in the pews out into the community to serve, until someone suggested he make a switch. Instead, he began to focus on building relationships with those in the community and bringing outsiders to the pews. He emphasized how we should commit ourselves to studying new cultures and using this to build relationships in settings outside our comfort zones.

The following act was a sketch commenting on clichés surrounding the Christian community.  It specifically focused on etiquette in the church foyer. One girl acted as a sort of master to a boy, telling him things he could and could not say when interacting with others in church. It made a bold statement that many Christians want their peers’ approval more than their acceptance. Some were confused because this act began without any introduction, allowing the audience to make their own conclusions.

Becky Hartung, a senior communications studies major, was next to speak. She came in looking like an average Biola senior, but left us all with a new attitude about the power of humor. Hartung expressed her love of the improv style of acting and how humans use laughter to connect with one another. Sharing a joke or a piece of humor keeps us connected. Humor involves listening and appreciating what someone is saying to you. Making someone laugh is a way to recognize that a certain person approves of you, and likes you. Hartung expressed how similar humor and empathy are to each other. Both involve not just hearing the other person, but listening to them and responding in a positive and productive manner.

Introduced by Becky Hartung was the lovable Emily Browning, a junior at Biola. She offered the humor perfectly explained by Hartung by relating to the audience and made them laugh until they could not breathe. Though Browning’s piece was short, those who attended the session will remember it.

The last speaker was Dean of Spiritual Development Todd Pickett. His talk centered around the metaphor of glaciers and how they can often leak. A glacier may look strong and solid, but one bump will cause a huge outpour of water. Pickett related the glacier to us and that our sin was a leakage of the heart. We may seem put-together, but one bump and we leak. This gave the audience an opportunity to put sin in a different perspective. He taught us to empathize with others as well as to give ourselves a break.

Each speaker was accompanied by Kearci Moir, painting in the background during each talk. When it was complete, it revealed a girl with the familiar orange Instagram likes notification covering her eyes. At the end, Kearci revealed her inspiration for the piece, which was how social media affects the way we see ourselves and the world. She said the likes bar covered her eyes because the approval of social media has taken over many of our identities.

Conflict displayed through different mediums, such as art, can help us better understand how to overcome it. Not everyone learns best through an auditory presentation and this session helped those who like alternative learning styles. Many walked away with a new perspective in dealing with conflict through the love of Christ.