The Eagles came within 120 seconds of a program-defining upset. 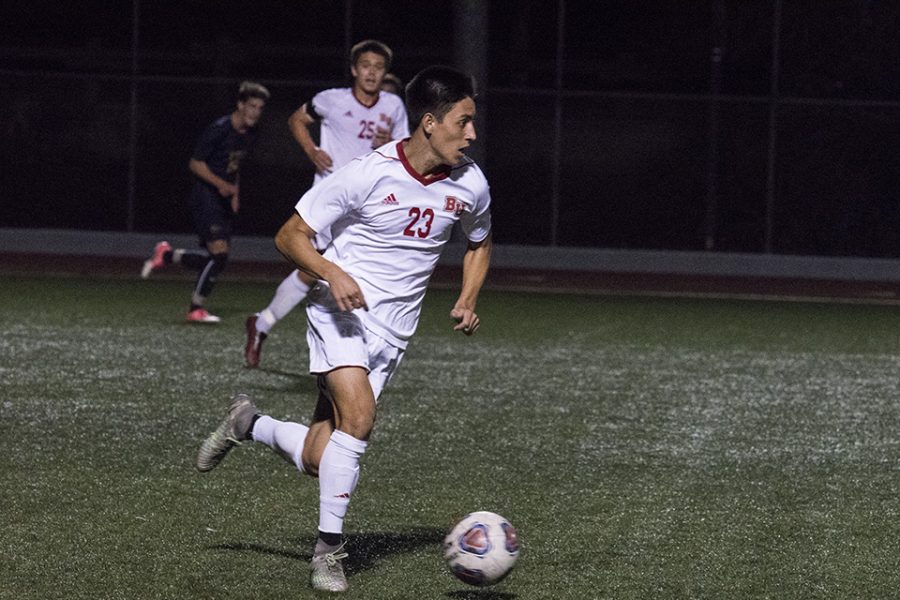 Sometimes, Goliath beats David. That happened at Al Barbour Field on Oct. 23, when men’s soccer blew a late lead over the undefeated California Baptist University Lancers, eventually losing 3-2 in double overtime.
EAGLES STUN LANCERS IN FIRST HALF
CBU entered the match with nearly every advantage imaginable. The Lancers had won all but two of their games, which they tied. The Lancers sat atop the PacWest standings while the sixth-place Eagles needed to keep their chances alive for a top-five conference finish to earn eligibility for postseason play.

About six minutes into the game, junior midfielder Hernan Sotelo attempted a shot that CBU blocked, but calmly collected the rebound and deposited it in the goal for a 1-0 lead. The early deficit stunned the Lancers, who had only trailed for just over four minutes in total before Sotelo’s score. From there, Cal Baptist predictably controlled possession. Senior goalkeeper Igor Puglia made three saves within the final 10 minutes of the first half, keeping CBU off the scoreboard heading into halftime.
CBU SCORES LATE TO FORCE OVERTIME
The game became much more physical in the second half, with numerous fouls on both ends and five yellow cards handed out in total. Additionally, the referees ejected two CBU players with red cards, leaving the Lancers unable to field more than nine players at a time. However, Lancers forward Aidan Apodaca converted a costly Biola foul in the 64th minute, tying the game. The Eagles got an opportunity to retake the lead in the 81st minute, when three Lancers players received yellow cards. Senior midfielder Jarrett Pugh stepped up with his team-high sixth goal of the season on the ensuing penalty kick, making the score 2-1 Eagles. The Lancers, with less than 10 minutes between them and their first loss, furiously tried for an equalizing goal. Biola’s defense held firm until a handball in the box, with just over a minute remaining, setting up another Apodaca score off a penalty kick.
LANCERS SINK EAGLES WITH GOLDEN GOAL
The game went into overtime tied at two, and neither team could score in the first overtime. The Eagles also lost some of their numbers advantage when sophomore defender Jake Munivez received a red card of his own, bringing the Eagles down to 10 men on the field. In the second overtime, CBU defender Caley Powers faked out a visibly exhausted Puglia and tricked the ball into an empty goal to give the Lancers a 3-2 victory.

Cal Baptist remains undefeated, while Biola falls to 6-7-2 on the season and 5-4-1 within the PacWest. Puglia had one of the best games of his career, keeping his team in the game with a whopping 10 saves on the night. In total, CBU racked up a whopping 30 total shots (13 on goal) while the Eagles had nine (two on goal).

The Eagles return to action in their final home game of the season, which will double as senior night, against Point Loma Nazarene University on Oct. 28.