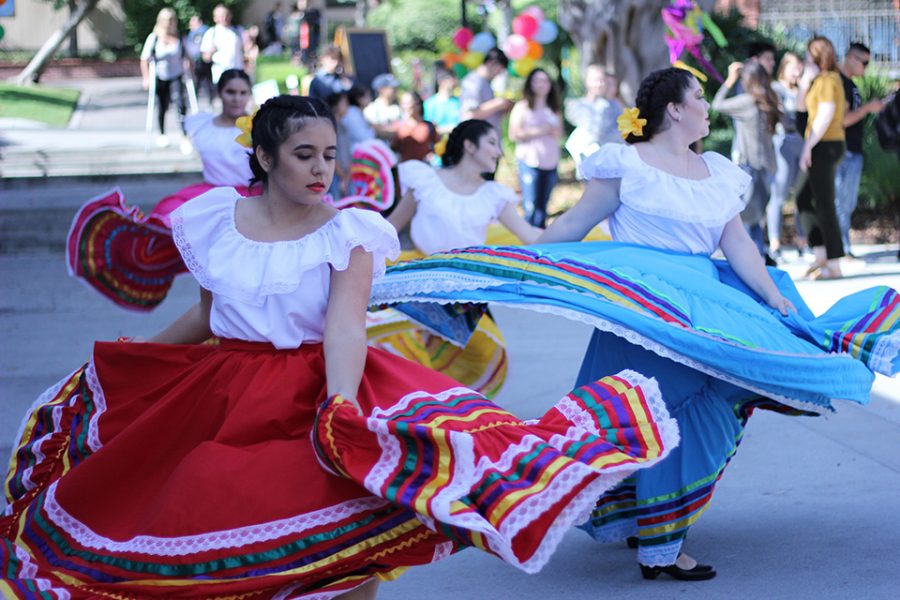 A long line of people spilled out of the Fireside Pavilion. Bright and colorful decorations lined the mailboxes, and flags from Latin countries lined the Student Union Building. As Latin music rang out in the middle of campus, one could see the sure signs of a fiesta.

Campus celebration
What started out as Cocina Latina run by Unidos, the Latino club on campus, grew to be Fiesta Latina with the help of Student Programming and Activities. Previously held in the library courtyard, the event focused on bringing Hispanic foods to Biola. The event included Honduran, Salvadoran, Colombian, Guatemalan and Argentinian cuisines this year, which geared the event towards a more holistic approach to culture for the celebration of the end of Hispanic Heritage Month.

“A lot of people are aware of Mexican culture, Mexican food,” said Elizabeth Martinez, president of Unidos and senior communications disorders major. “People have the stereotype thinking that all Latinos are Mexican, and there’s a lot of Latinos on this campus who are half and halfs from different Latin backgrounds like Central American or South American. So we just wanted to share food that most people aren’t aware of that are from Latin America.”

With the colorful decorations, facts about Hispanic countries’ independence days on every table, an art piece of Frida Kahlo, a piñata and many attendees dancing to Latin music throughout Fiesta Latina, SPA and Unidos deemed their event successful in bringing the Hispanic culture to Biola.

“I think last year, there was a few people who showed up because they knew about it, and more and more people trickled in as they were seeing that other people had food,” said Nayeli Escobedo, junior intercultural studies major. “Whereas this year people started showing up as soon as the event started, which was a surprise. I did expect more people, because it was sponsored by SPA, but I didn’t expect nearly as much as we had.”

Laura Igram, director of SPA and Student Government Association advisor, also believes the event was a success because of the number of attendees.On Fridays, attendance at events can be a gamble as many students do not have classes or leave for the weekend.

“We’re estimating somewhere between 350 to 400 people have come through for food and for the entertainment, and so we’re really happy,” Igram said. “It seems like a lot of students are having a great time, and loving the food, and there’s all different student cultures represented here now. I think it’s been a success.”
Mexican folk dancing
More than this, the Biola community was exposed to Mexican folk dancing, or Baile Folklórico, through a live performance. Sophomore public relations major and SPA event coordinator Angelique Calvillo invited the Baile Folklorico club from John W. North High School in Riverside to dance at the event.

“We were looking for dancers, and I knew my school had a really good Baile Folklórico team, so I reached out to them,” Calvillo said. “They were super happy. The best part is sometimes they don’t get these opportunities. So being a Biola student and having the ability to offer them this opportunity to bring the culture to Biola—I’m really grateful to do that, and they love it.”

“It’s really cool. It’s a new experience, it’s something that in my six years I haven’t done,” Ayala said. “I’ve never performed at a university or anything like that, which is really cool, because we get to see the environment that’s here.”
Bringing home here
While Fiesta Latina provided new experiences for some, for others the event reminded them of home, like junior nursing major and SPA event coordinator Ijah Lockett.

“I’m from Long Beach, and Long Beach is extremely diverse and most of my community that I lived in was primarily African-American and Latino or Latina,” Lockett said. “For me, this is home, and I get to experience it and enjoy the food, enjoy being with people who are happy, but love their culture too.”

Fiesta Latina is the largest event that Unidos puts on all year. With the help of SPA, the event was much larger this year. It not only showed the community a piece of Latino and Latina culture, but gave campus a fun event to dance, eat and enjoy themselves at.

“This is a good way … to show people that we want to give to them and showing part of our culture is a way that we can do that and opening up ourselves to the rest of the campus,” Escobedo said.