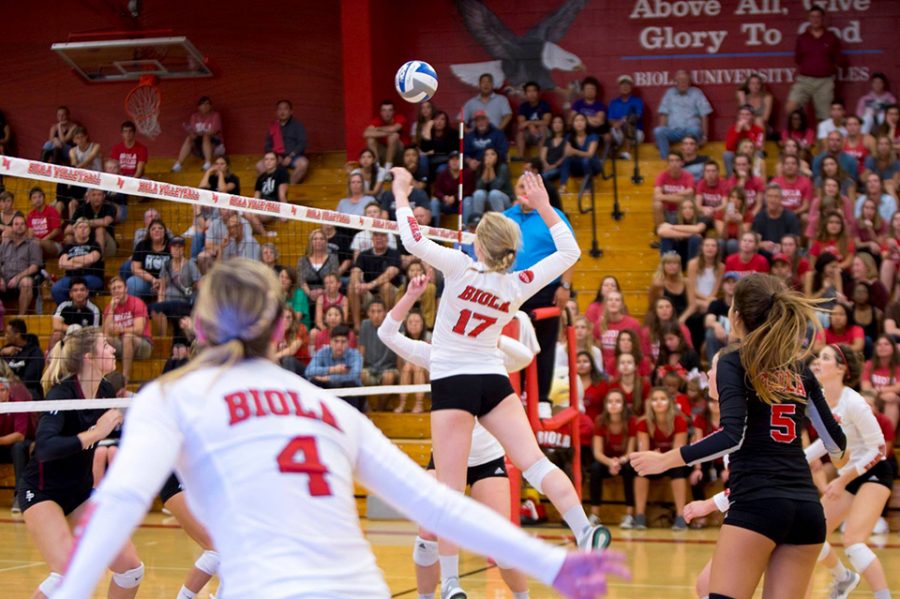 University Argonauts on Oct. 21. They would claim the victory in a tightly contested four-set match.

EAGLES TAKE FIRST TWO SETS WITH STRONG START
The Eagles started the first set strong, picking up four straight points led by freshman middle blocker Bekah Roth to claim a 4-1 lead. Later, a kill from sophomore outside hitter Brooke Watts put the Eagles in front 11-6. A big push from the Argonauts closed Biola’s lead to 16-15, but the Eagles doubled down, going on a three point run to stretch the lead back to 19-15. Another NDNU run tied the score at 20, but another Watts kill put the Eagles up 23-22. The Argonauts again pushed back to tie it at 25, however, a kill from sophomore outside hitter Sabrina Winslow and one from junior opposite hitter Karly Dantuma gave the Eagles a hard fought 27-25 set win.

Led by Winslow and junior middle blocker Sierra Bauder, the Eagles took an early lead on a five-point run to start the second set. Several more kills from Winslow and Bauder made the score 21-10, and a Dantuma kill gave the Eagles set two, 25-14.

In the third set, the Argonauts scored five straight to start just as Biola had done in the second. The Eagles picked up an ace from freshman middle blocker Sara Docktor to make the score 11-6, but the Eagles never quite found their rhythm. Several attacking errors helped de Namur stretch their lead, and they would close the set out on a kill for the 25-15 win.
BIOLA CLOSES OUT SIXTH STRAIGHT WIN
Biola came out focused in the fourth, led by two aces from sophomore libero Kaitlin O’Brien to take an early 8-5 lead. Two more aces from senior libero Tess Van Grouw pushed the lead to 12-7, but an Argonaut run cut the lead to 12-11. The Eagles bounced back with a run of their own, picking up four straight led by a kill from Roth. A Watts kill gave Biola a 21-18 lead as they looked to close out the set, which they would do on two straight kills from Bauder to win the match 25-21.

Winslow played well all night, racking up an impressive 16 kills while Dantuma tallied 12. Watts also had a strong night with nine kills and three blocks. Junior setter Brinley Beresford dished out 40 assists to lead the Eagles.

On defense, Biola took command at the net, with Bauder recording six blocks and Beresford putting up three. Freshman libero Sami Hover led an impressive back row effort from the Eagles as she picked up 21 digs, while Van Grouw put up 18.

Biola currently sits at third in the PacWest conference with an 8-3 record (14-5 overall). They resume play at first place California Baptist University at 7 p.m. on Oct. 26.