Cross Country scores fantastic finishes across the board in first conference championships. 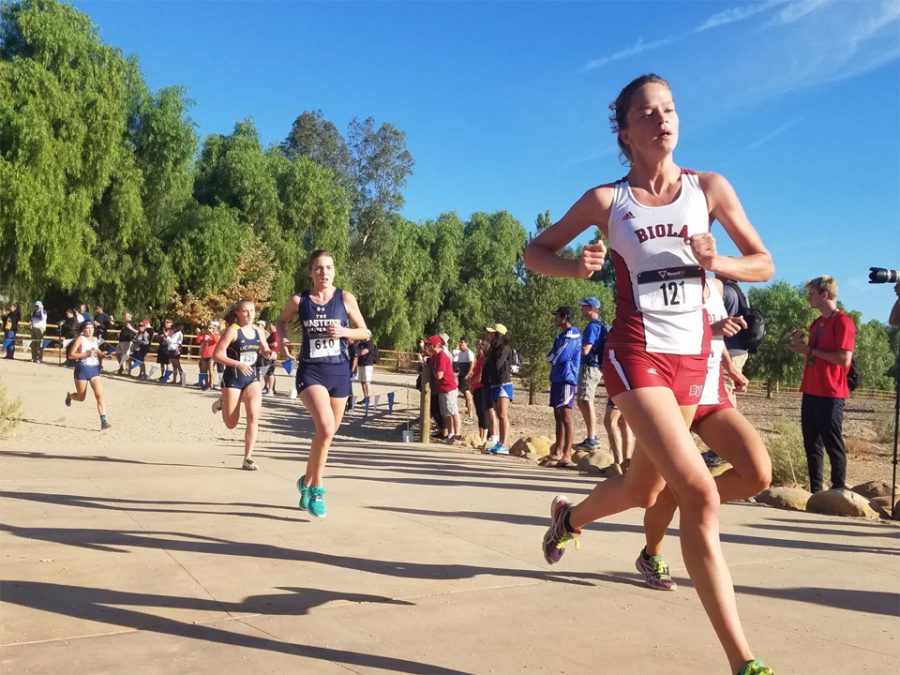 Cross country participated in their second-to-last meet of the season on Oct. 21, racing in the PacWest conference championships. It marked the first PacWest championship competition of any sort for Biola’s athletics program as a whole. The men’s and women’s teams gave the Eagles a fantastic start on this stage, as both recorded third-place team finishes thanks to several strong individual performances.

Senior Hannah Hunsaker led the way for the Eagles in the women’s 6k with one of her best times of the season, coming in seventh at 21:51.9. That proved enough to make Hunsaker the lone Biola runner to reach first team all-PacWest.

Freshman McKenna Mason continued her strong debut season, finishing 17th with a 22:25.4 time. Senior Stephanie Croy came in right behind her at 18th with a 22:28 time. Both Mason and Hunsaker received third team all-PacWest nods for their efforts. Sophomore Mandy Reyes and junior Emily Ransom rounded out the Eagles’ scoring in the 6k with 22nd and 23rd place finishes with times of 22:34.2 and 22:38.1, respectively. The quintet elevated Biola to a podium finish behind Cal Baptist University and Academy of Art University.

MEN BEAT OUT APU FOR PODIUM

As a pack, three Eagles finished together to lead Biola in the men’s 8k. Freshman Gio Orellana came in 13th with a 25:57 time while sophomore Gabe Plendcio crossed the finish line right behind him at 26:01.4. Seconds later, junior Ryan Thompson recorded a 15th-place finish with a 26:04.9 time. Orellana and Plendcio made the all-PacWest second team while Thompson barely missed the cut, settling for an all-PacWest third team nod. Freshman Ryan St. Pierre and senior Timothy Wilson also finished in Biola’s top five. St. Pierre finished 25th overall with a 26:35.1 time while Wilson came in 27th with a 26:37.5 time. All five runners proved crucial to giving the Eagles another top-three team finish and edging out archrival Azusa Pacific University for the final podium spot.

In addition to podium spots in their inaugural PacWest postseason meet, both Eagles teams finished ahead of APU, with the Cougars taking sixth on the women’s leaderboard and fourth in the men’s leaderboard. This gives the Eagles 20 more Cornerstone Cup points, stretching their lead to 40-10. Competition between the two schools will go on a two-and-a-half month hiatus before resuming with women’s and men’s basketball at APU on Jan. 6, 2018.