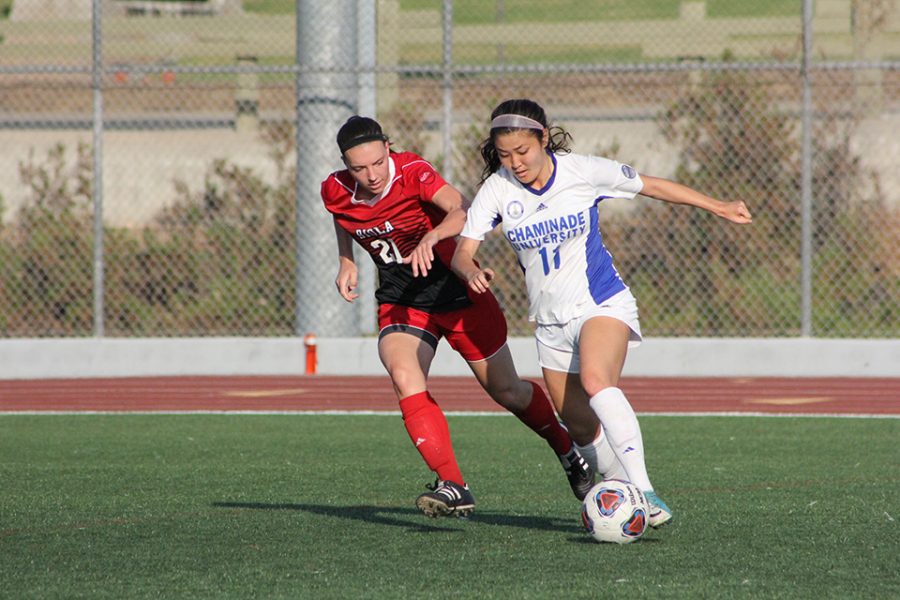 Biola hosted its final match of a three game homestand against the University of Hawaii at Hilo Vulcans on a scorching hot day at Al Barbour Field on Oct. 16. The Eagles needed a victory to move from sixth to third in the PacWest conference. After a relatively quiet first half, second half goals from sophomore forward Sarah Jeffries and senior midfielder Janae Megorden gave the the Eagles a 2-0 victory.

Capitalizing on good opportunities
“It was a great effort by Hilo,” said head coach Erin Brunelle. “We knew it was going to be a battle. It took us awhile to break through, but I think the ladies did well to capitalize on some good opportunities and to defend well to close out the game.”

After a slow start from the Eagles, the hosts started to show their strength and pushed for an opening goal. Biola’s first clear scoring chance came in the 25th minute when sophomore midfielder Hali Oakes shot the ball onto the crossbar and out for a goal kick. Senior midfielder Ashley Ramirez shot from outside the box seven minutes later, but Vulcans goalkeeper Jenna Hufford saved the effort.

The second half saw the Eagles continue to pressure the Vulcan defense, almost breaking through in the 53rd minute when Jeffries dribbled past two defenders and shot inches beyond the post. Junior defender Madyson Brown got on the end of a free kick from sophomore defender Colie Martin, but Hufford saved Brown’s header.

The Eagles finally broke the deadlock in the 61st minute when senior defender Bri Mikalson fizzed in a low cross to Jeffries, who flicked the ball into the net from a tight angle. The goal ended a seven-match scoreless streak for the forward.
Dynamic scoring options
After defending the initial pushback by Hawaii Hilo, Biola extended their lead in the 76th minute to put the match out of reach. Senior forward Samantha Verduzco notched her team-leading fourth assist of the season when she crossed the ball to Megorden, who calmly placed her shot in the bottom left corner of the goal to give the Eagles a 2-0 lead.

“We have numerous players that can step up and put the ball in the back of the net,” Brunelle said. “It makes us even more dynamic if teams try to take away one or two players as scoring threats, that opens the door for other players to get a goal.”

Sophomore goalkeeper Christina Rodriguez had a tame evening, only needing to make one save as her defense held the Vulcans to one shot on goal to the Eagles’ eight.

The Eagles improve to 9-2-1 on the season (5-2-1 PacWest) and move up to third in the conference. They travel to Irvine, Calif. to face Concordia University Irvine in another critical PacWest match on Oct. 21.