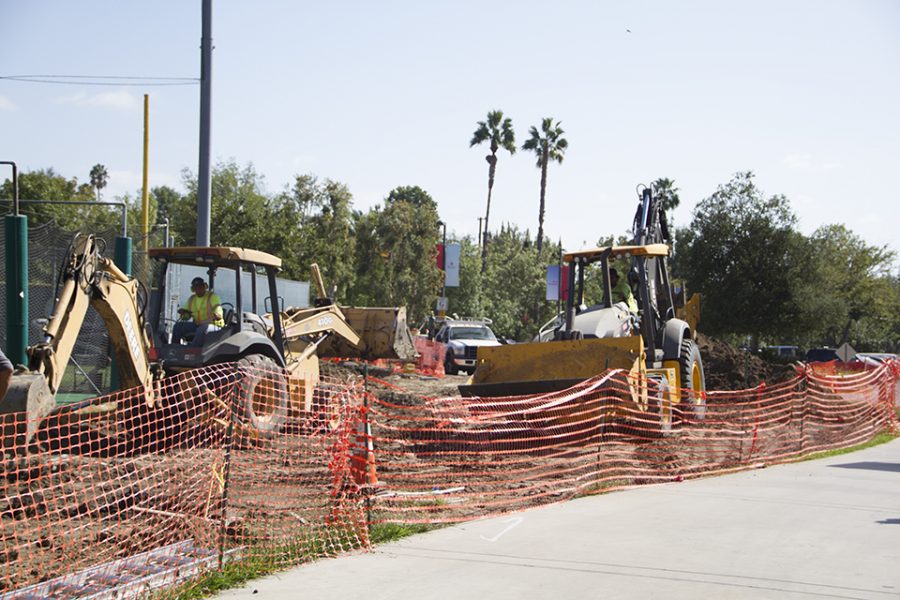 An extension to the drainage ditch on the end of Sixth Street is currently in the process of installment. The construction has been impacting traffic for all three lower campus dorms.

Facilities management had initially slated the construction to take place during a break in which students would not be on campus, but moved it forward due to a recent decision by the baseball team to put a practice facility in the area.

“What really drove doing [the construction] now is that the baseball team is wanting to put some batting cages in that area by the baseball field,” said Chris Cain, project manager for facilities planning and management. “We wanted to make sure we got this work done before that, so that way we don’t have to redo the batting cages at a later time.”

Some students, however, have met the construction with irritation. Many seem to think that the construction would have been better timed during the summer, when students are not coming in and out of the parking lot on a consistent basis. They have been quick to voice their frustration with the situation.

“It has been annoying the last two days, because they’ve shut it down to two lanes,” said Bridget Winters, junior public relations major and resident of Hart Hall.

a necessary addition to campus

Despite the irritation, Cain insists that the construction is a necessary addition to campus. He believes the extension will prove beneficial to those on campus, and that the brief discomfort and inconvenience of the construction remains a worthy tradeoff for the possibility of future stability during heavy rain seasons.

“This is really the last location on campus where we have significant site flooding when we have a heavy rain season, like the one we had last year,” Cain said.

The drainpipe extension will extend the rainwater capacity from 12 inches to 36 inches. This would eliminate any prospect of flooding in that area in the future, and would decrease the likelihood of water related issues in the buildings on lower campus. Some students, however, remain doubtful that the drain pipe will change much.

“To be honest, last year when the rain was really bad during the winter, I did not see any flooding on the field,” said Mitchell Wang, sophomore sociology major and resident of Hart Hall.

Regardless of whether the extension is necessary now, Cain believes it will remain beneficial as more of a precautionary measure.

Facilities projects to be finished with the construction by Oct. 8. They hope to finalize a few small details regarding the project throughout the following week, and once those are finished, to begin working on the batting cages.