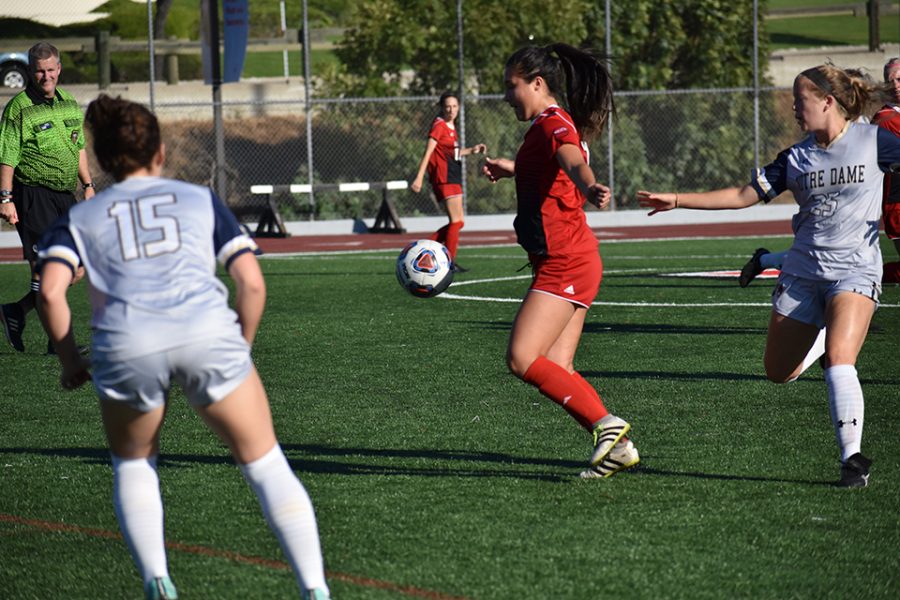 For their first home PacWest match of the season, Biola hosted the Notre Dame de Namur Argonauts. The match started off with a fast pace when senior forward Samantha Verduzco scored just seconds in, but the goal was disallowed because she was ruled offsides. The Argonauts controlled the next 30 minutes of possession while creating a few chances of their own, but they could not find the back of the net. The Eagles did not get through the opposing defense until the 33rd minute when sophomore forward Sarah Yang found herself one on one with Argonauts goalkeeper Abigail Cebrero, but Yang’s shot hit the crossbar and was cleared.

Yang breaks the ice
Yang found herself one on one once more just minutes later, but this time Cebrero made the save, keeping the match 0-0. The breakthrough goal finally came seconds after halftime, when a cross from sophomore forward Sarah Jeffries found the feet of Yang, who placed the ball into the bottom corner to give the Eagles a 1-0 lead. The lead would not last long, as the Argonauts tied the match less than three minutes later when forward Abigail Dyer shot into an open net after a scramble in front of the Eagles’ goal.

The hosts’ tiebreaking goal came in the 56th minute after an Argonauts defender fouled Verduzco in the box. Sophomore forward Paula-Marie Labate stepped up to take the penalty kick and buried it into the top right corner past a diving Cebrero. The Eagles sealed the victory with a counterattack goal in the 76th minute when Jeffries’ cross found Yang again, who guided the ball into the net with her chest to make it 3-1. The hosts controlled the final 15 minutes to win their first PacWest match ever.

“[Going forward] this gives me more confidence in myself to know that I can [perform well],” Yang said. “[This win] gives us confidence, it is giving us a step forward because this is our first year in NCAA.”
Plagued by Injuries
The win came with a cost as sophomore midfielder Hali Oakes, junior midfielder Emily Neighbors, sophomore defender Colie Martin and sophomore goalkeeper Christina Rodriguez all suffered injuries throughout the match. Oakes and Neighbors both left the match in the first twenty minutes, with Oakes returning to the match but coming off injured again in the 53rd minute. Martin returned to the match, but was substituted off for aggravating her injury once again in the 58th minute. Rodriguez played on, made five key saves and controlled her box well throughout the game.

“Welcome to Division II,” said head coach Erin Brunelle. “It’s a physical, and we’re going to have to get stronger. That was something that we talked about at the end of the game, finding the ability to take hits and to initiate hits, because that is part of the game.”