The Eagles pulled off an upset for their first PacWest victory. 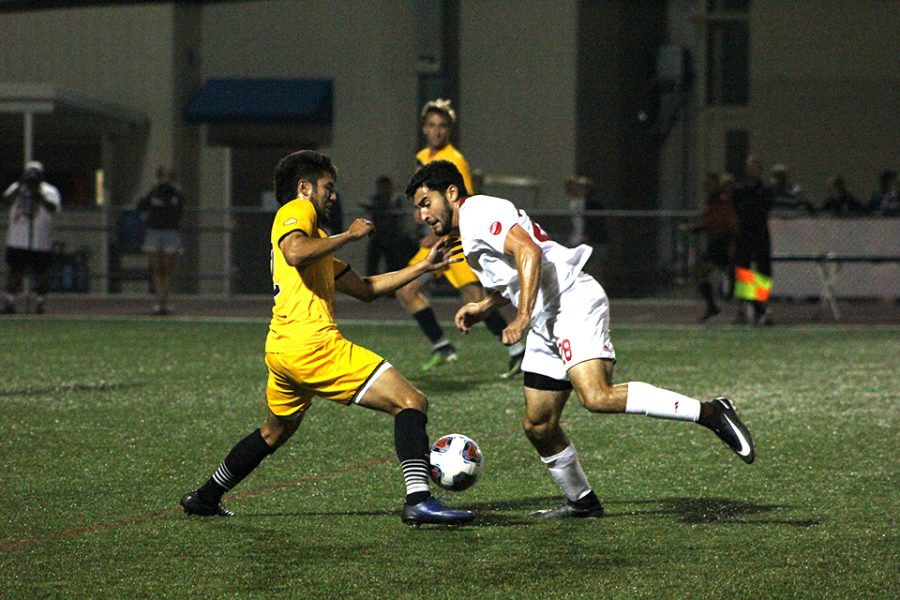 Men’s soccer picked up their most monumental victory of the season on Sept. 28, handing the Notre Dame de Namur University Argonauts their first loss of the year by a score of 1-0. It also marked the first home game and win for the Eagles within the PacWest conference.

The sweet feeling of an upset victory
“[This win] speaks a lot more than any pep talk I can give them,” said head coach Todd Elkins. “There’s nothing like a win against a good team to make you feel like, ‘Alright, we can do this,’ and kind of push down some of those doubts.”

NDNU controlled possession early in the first half but several of the best scoring opportunities belonged to the Eagles. Argonauts goalkeeper Javier Santana barely saved a breakaway chance from Eagles senior forward Keaton Kerr nearly six minutes into the game, and a header from senior defender Sammy McKay missed wide. The Eagles looked like they finally converted when sophomore defender Hunter Finnegan found himself between Santana and the goal for an easy tap-in, but the score was called back due to offsides on Finnegan.

Biola broke through in the 40th minute when McKay’s header off a free kick from senior defender Clayton Mohler landed to Santana’s right, giving the Eagles the 1-0 lead they would take into halftime.

“It was probably the best moment of the season [for me],” McKay said. “It was the most fulfilling thing ever to actually score in a conference game and for it to be the winning goal, I was just ecstatic.”

The Eagles stepped up their offensive pressure in the second half, while the Argonauts responded by making the game much more physical. NDNU defender Chandler Alo was issued a red card for sliding into Finnegan to stop a breakaway chance. The Eagles could not convert the ensuing free kick, but momentum remained on their side when the Argos picked up their second yellow card of the game moments later.
Their best against our best
Despite controlling the ball for much of the game, NDNU could not get into the goal thanks to several missed opportunities on their part and great defense from the Eagles. Over the final 20 minutes of the second half, the Argos took all eight shots, four of which had to be saved or blocked. The ball rarely left the Eagles’ half of the field even though NDNU was playing down a man due to the red card.

“I knew there would be moments tonight where their best would be against our best, and our best withstood it,” Elkins said.

The win moves the Eagles to 2-4-1 (1-1 PacWest) on the season. They will continue their homestand against Dominican University at 7 p.m. on Sept. 30 at Al Barbour Field.