Dixie State blazes over the Eagles

Though the Eagles battled well through a physical match, they took a loss to the Trailblazers. 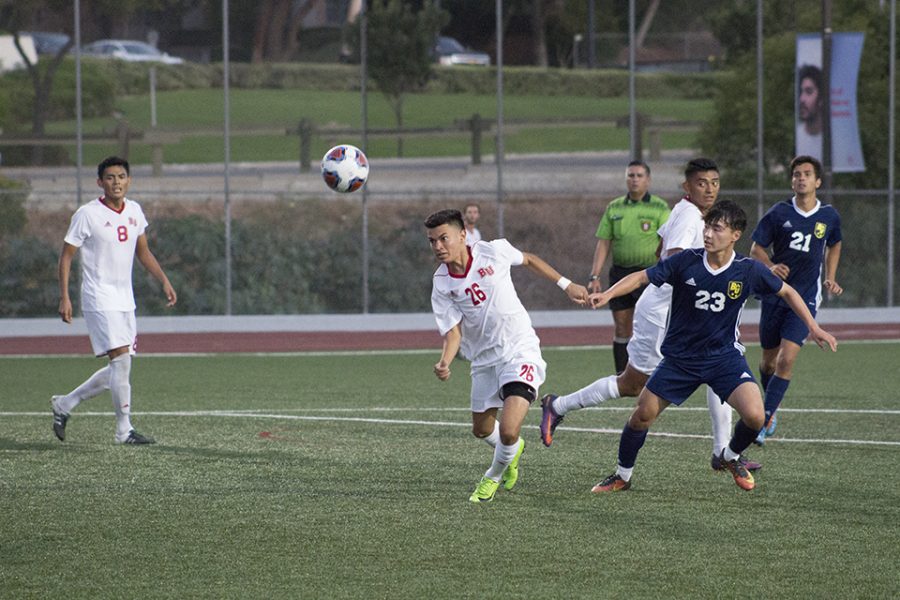 In a tough match, the men’s soccer team challenged Dixie State University, the defending PacWest conference champions. They fell short of starting their PacWest schedule with a victory, losing 1-0.

An uneventful first half

Biola could not carry their aggressive habits over from their last game, only attempting four shots on goal. Neither team completely dominated the game. The possession went back and forth, as neither side could break through.

The uneventful first half ended in a 0-0 score. The Trailblazers doubled the Eagles’ attempts on goal with six compared to Biola’s three, yet neither team could quite finish and put the ball into the net. As the game dragged on, fouls and rough playing took the spotlight. Biola finished with 18 fouls, while Dixie State finished with 15. Biola earned two yellow cards and Dixie earned three. Dixie State defender Ascari Robles was ejected with a red card in the second half.

The second half started off with more of an offensive air. The shots on goal increased significantly as both teams pressed to score. The answer for a scoring shot came in the second half around the 71st minute, when Dixie gained the opportunity for a free kick. Dixie State’s forward Ather Dawood saw Biola’s senior goalkeeper Igor Puglia fumble with the ball and shot it into the Eagle’s net to earn the Trailblazers a 0-1 lead.

Biola’s best scoring chance of the game came in the last few seconds thanks to an impressive shot on goal by junior defender Parker Setran, but Dixie State goalkeeper Zach Nielson punched it out. Though the Eagles fought valiantly for the duration of the match, the Trailblazers emerged victorious.

Junior midfielder Kousei Mattox led the way for shots with three, followed by his teammates: sophomore defender Hunter Finnegan, Setran and junior midfielder Gilbert Sotelo, all with two shots. The Trailblazers finished with a total of nine shots, while the Eagles took an impressive 15 in a valiant fight against a tough opponent.

Dixie’s statistics for the season continue to be perfect, with a 6-0-0 record, while Biola fell to 1-4-1. The Eagles now gear up to defend their home turf on Thursday, Sept. 28, against Notre Dame de Namur at 7 p.m. at Al Barbour Field.