The two schools announced a new yearly competition across all sports. 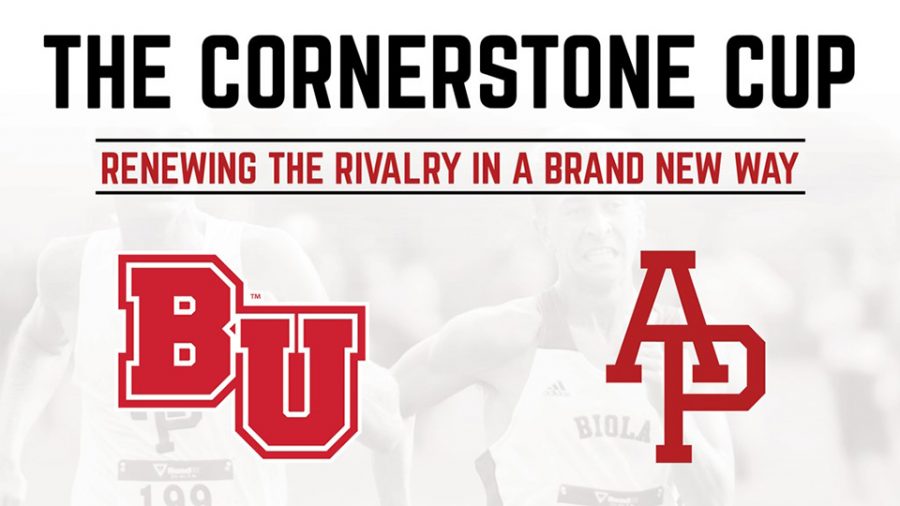 In a joint effort to reignite a storied rivalry, the athletic departments of Biola and Azusa Pacific Universities began a new era in their schools’ shared history when they announced “The Cornerstone Cup” on Sept. 14. The cup will act as a prize given to the program with the most “points” at the end of each academic year. Points are awarded to each school based on how they do in direct competition with the other program.

Resurfaced rivalry
Head-to-head team sports like basketball, volleyball, soccer and tennis can earn 10 points per sport based on their regular season record against their counterpart, with each team receiving five points if they split the season series.

“When I came to Biola I was aware of the long standing rivalry between us and APU. Both games will be very exciting and I cannot wait to go out there and make my school proud,” said senior basketball player Blake Shannon Jr. in an email. “We can’t help to look ahead to this matchup because of the history behind the game.”

For sports that have meets like swim, cross country and track, 10 points will be awarded to whichever school finishes higher in the team rankings at the conference championships. Biola’s men’s swim team cannot qualify for the cup as APU only has a women’s swim team.

The two schools have a long feud stretching back decades thanks to their status as private Christian universities with evangelical ideologies, their similar color schemes and their campuses’ proximity to each other — APU’s campus is roughly 17 miles north of Biola’s. The two schools have not shared a conference since APU made the leap to NCAA Division II and the PacWest conference in 2012, leaving the Eagles behind in the National Association of Intercollegiate Athletics’ Golden State Athletic Conference. Biola joined DII and the PacWest starting in fall of 2017.

Despite the lack off important matchups featuring the two schools, both Biola and APU diligently scheduled numerous non-conference games, scrimmages and meets throughout the past five years. Additionally, many Biola faculty members have continued the habit of taking friendly jabs at Azusa whenever the opportunity arises during lectures, such as New Testament professor James Petitfils jokingly comparing the Roman occupation of Israel in the time of Jesus to if APU took control of Biola’s campus. Multiple APU students have told the Chimes that some of their professors take similar shots at Biola.
a little friendly animosity
The next generation of Eagles cannot wait to make their mark.

“I knew that the rivalry has been around for a very long time and when we play APU, the gyms are packed and loud,” Shannon said in an email. “I don’t think I will fully understand the meaning and importance of the rivalry until we step out on the court against them. I will definitely have to take a second to soak in the rivalry and the amazing atmosphere.”

Ultimately, however, both schools remain united in their pursuit of equipping college students with a Christian education, a unity emphasized in the friendship between Biola President Barry Corey and APU president Jon Wallace.

That said, a little friendly animosity can help boost school spirit for both athletes and the general college population alike.

“When we have rivals like this, it kind of makes the games more hyped up,” said sophomore volleyball player Sabrina Winslow. “It definitely adds more excitement.”