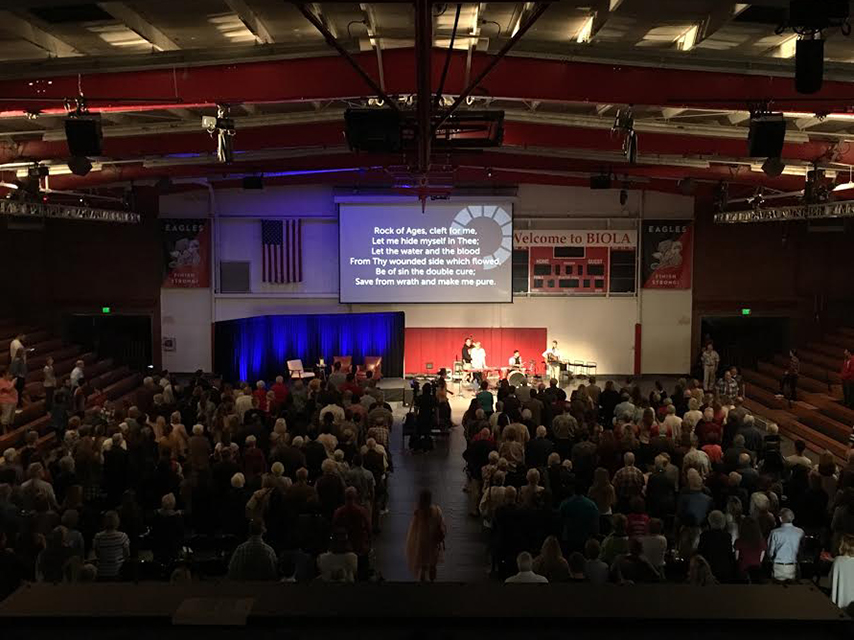 This is the first year the Biola Hour has been on air since the 1990s.

thinking through a lot
Mike Ahn, the director of worship and formation for Student Development and the host of the Biola Hour, speaks on his vision and struggles of putting the chapel and podcast on. The Biola Hour has two different audiences: Biola students at chapel on Friday mornings, and podcast listeners in the outside world.. Ahn shared this year was very experimental for the show and chapel.

“One of the surprising things is that we’ve been learning a lot this year,” Ahn said. “I think this year has been a big experiment, and we’ve been trying to figure it out. I think we’ve been adjusting to things according to feedback, and that’s why we’ve been having the feedback.”

The feedback changed the setup of the chapel and the podcast. The Biola Hour now does a 10-minute interview with the speaker and opens up the last 15 minutes for the students to ask questions. It was the other way around when the chapel started. Ahn says the chapel team continues to learn how to improve the podcast portion.

“For one, students getting to speak into chapel more, getting questions answered that maybe they don’t get an opportunity to with other speakers,” White said.

Ahn elaborates on the student engagement in chapel and the benefit this setting brings to chapel speakers.

Ahn expressed that allowing students to ask questions helps answer similar ones that other students in the audience have. This features also helps him understand  what the student body thinks about the topic at hand.

“Another big positive, at least this is what students say on their feedback forms too, [it’s] listening to other students’ questions so that’s part of the chapel where students get to listen to what other students are asking,” Ahn said.
How the show works
The latter part of the show consists of the speaker answering the audience’s relevant questions about the topic. White tells how he and associate dean of Spiritual Development Lisa Igram, sift through the questions.

“We have a team looking through those,” White said. “ We typically have an eye for questions that are actually helpful for practical issues. Sometimes, we’ll get a lot of questions that are more just about opinions, theoretical things, or concepts, which are great and interesting, but we’re really concerned with students getting some practical application answers.”

Ahn shares how he chooses the speakers every week. He found a website that focuses on seven cultural mountains. The seven mountains include arts and entertainment, business, education, family, government, media and religion. He chooses speakers by looking through this lens.

As far as meeting the cultural mountains, Ahn has brought in Nancy Yuen and Derek Minor for arts and entertainment, as well as the captain of the U.S. Women’s volleyball team for the final chapel and podcast of the semester. The mission of the Biola Hour seeks to find influential people who try to engage culture in unique ways.

Freshman psychology major Nathanael Volf spoke on the helpfulness and appeal of the guests.

“I think some of the guests are [interesting] and some aren’t,” Volf said. “I think I’ve been to four or five. I think the guests are most helpful when they give students something to walk away with, whether it’s a new view on how they approach their lives. For example, Derek Minor, he gave the students a new lens to look at secular music through.”

One of the goals for the Biola Hour includes reaching millennials. Volf believes the selection of chapel speakers could improve in order to meet this goal.

“I think it can improve by picking speakers that have a closer tie to our generation,” Volf said. “I’ve heard a bunch of different speakers, and there were two of them that I just couldn’t connect with at all.”

The team of producers for the Biola Hour continues to learn. This year proved to be an experiment and a success in the minds of the producers. There is only one Biola Hour left of the year on Friday, May 19, and the guest speaker is Christa Harmotto Dietzen, the captain of the U.S. Women’s Volleyball team.