No injuries reported in minor burst next to student mailboxes. 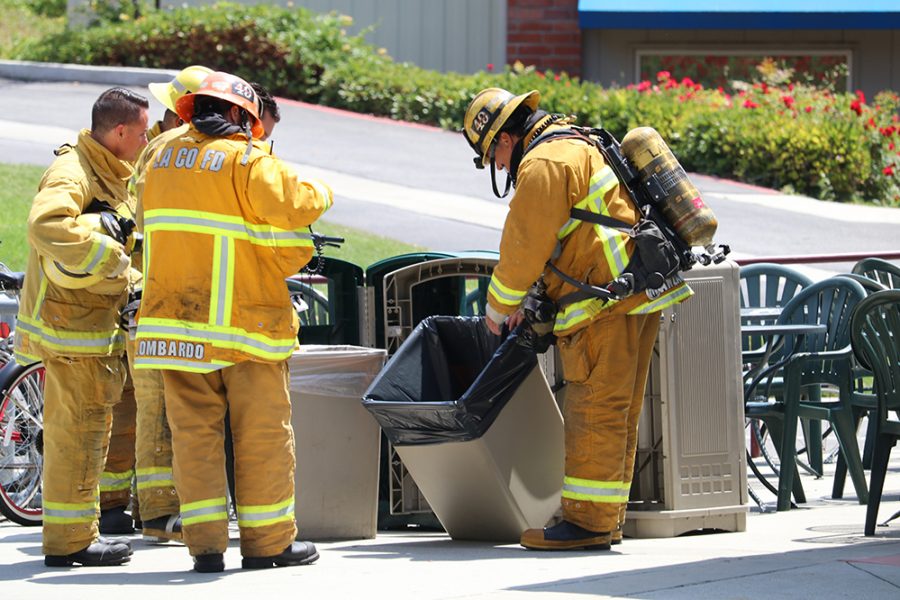 Students reported hearing loud bangs and seeing a puff of smoke from a green recycling bin beside the student mailbox building at 11:10 a.m.

a random explosion
“It was random, kind of out of nowhere a random explosion just kind of happened from one of the trash cans, the recycling bin. It was really loud and it was reason for concern. It sounded much louder than the regular toy firecracker,” said Veronica Rios, sophomore political science major.

After Rios saw the small explosion, which blew open the door of the recycling bin, she went to investigate the scene to see if the cause was immediately noticeable.

A few minutes later, Campus Safety, the Los Angeles Sheriff’s Department and the Los Angeles County Fire Department arrived on the scene to tape off the area and investigate further. They were unable to find the device which caused the incident.
A quick response
“Just for precautionary purposes, we isolated the area, called [the] fire department and [the] LA County Sheriff Department,” said Chief Ojeisekhoba. “They came down, and they couldn’t find any device. So they deemed [that] everything’s okay.”

Rios appreciated the quick response of the officials and hopes students take this incident seriously.

“I hear a lot of people dismissing it ― the whole action that they made ― and I think we need to be a little more cautious and not just kind of dismissing very easily because even if we mistake  things as just, ‘Oh it could’ve been this, it could’ve been that, they came for no reason.” No, this is our safety we’re talking about.”

A few hours after the incident, a student reported to Campus Safety that one of the tires of his old bicycle, which was in the bike rack next to the recycling bin, had caused the loud bang and puffs of smoke.

“The tires, for some reason, just exploded,” Ojeisekhoba. “The tube inside the bicycle tire was what exploded and caused the smoke-like substance that people saw.”